It is available upon completion of Sweet's mission Doberman, but is temporarily unavailable between The Green Sabre and Home Coming. Taking over enemy gang territory gives the player more Respect and Money. The money is generated over time and can be collected in Grove Street outside the Johnson House. Neighborhoods also become safer for CJ to travel around since enemy gang members will no longer appear in the area, instead being controlled by the Grove Street Families.

The gang territories in San Andreas are denoted by colored areas on the map. This is a list of gangs whose territories Carl can take over, with their corresponding colors:

To take over an enemy gang's territory, enter the territory on foot and start attacking gang members (note: the initial kills must be done on foot). Once Carl has killed three gang members, an on-screen message notifies that a gang war has begun. Health and armor pickups spawn in the streets, and the first wave of gang members will move in on CJ.

Generally, an area with a darker shade of a gang color means a greater presence of that gang in that area. This means that an area that's shaded light purple, for example, would have few Balla members roaming around, which would make it hard to trigger a gang war in that area. To overcome this, walk over to the one or two Balla members, then get them to chase Carl until he finds some more Balla members. This will let Carl lure the three gang members required to trigger the war.

There are a total of three waves of enemies the player must defeat. They are equipped with increasingly powerful weapons, depending on the overall strength and size of the territory. In the first wave, enemy gang members likely wield poor weapons such as Baseball Bats, Pistols and Micro SMGs, and can be finished easily. The second wave is slightly more difficult than the first wave as some enemy gangs will equip the MP5. The third and last wave is the most difficult as all opposing gang members now wield the AK-47 or MP5, and can easily swarm and kill CJ if he doesn't take cover immediately or gets too close.

Killing all three waves of the enemy will make the gang war win on the player's side and cause the territory to fall under Grove Street Families control, with Grove Street members beginning to wander the area. One enemy out of each wave does not need to be killed, because often one or more will run into inaccessible places, especially in hilly territories. The surviving gang member will continue to wander the streets, and will no longer be shown on the radar map. He may still attack the player's character.

Taking over all of the other gangs' turf in Los Santos will mean that the Grove Street Families have completely taken over Los Santos; the player's territories will no longer be attacked.

Taking over 100% of territories is not a requirement for 100% completion of the game or its storyline, but does remove the random factor of territories coming under attack (which may occur while the player is engaged in another activity). In addition, the player will earn the "Grove Street War Lord" trophy/achievement (only for the PS3/PS4/360) and/or the "Ain't Nothing But a G Thing" achievement/trophy if done on the Definitive Edition of the game, alongside acquiring $1,000,000. After completing the game, gang warfare conditions continue when the game enters sandbox mode, meaning Carl can continue to take over and defend territories. 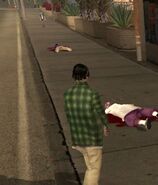 The third wave of Ballas in a gang war.

Carl can recruit gang members at any time he wants. Once they are recruited, he has the option of either calling them to him, having them stay put, or allowing them to scatter.

Occasionally, however, gang members might "go rogue", hijacking vehicles or chasing off after someone.

Gang Members do not have the best aim, and thus, are better served as a 'distraction' to give Carl more freedom to attack, rather than as 'protection' to CJ.

if CJ recruits a gang member and attack another gang member which is not recruited, the recruited gang members will attack him, but will never hit.

After taking over territory, while the rival gangs are still a force, they will periodically attempt to take territory back from Grove Street Families.

When territory is attacked by an enemy gang, the area flashes red on the map, and an icon will flash on the in-game radar. Carl will also receive a pop-up warning of the attack.

If Carl does not go to defend the territory, after a period of time it would be lost to the attacking gang, and respect would be drained. Once at the site of the attack, there will be one or more enemy gang vehicles blocking the road and a single (though sometimes large) wave of enemy gang members that need to be killed. Beware that some enemy gangs are equipped with a Shotgun that would likely lead to a hazardous and fatal result. Health and armor pick-ups will spawn in the area, just as they would during a takeover attempt.

There are three ways to avoid defending without losing that territory:

Attacks will typically not occur when Carl is outside of Los Santos.

In normal play, only territories involving Grove Street Families, Ballas and Los Santos Vagos appear and can be taken over. The other territories only become available if the player exploits a glitch.

If Carl controls a plane and flies east or west for 15 or more minutes, then crash the plane in the water and let CJ drown, there will be more Gang Territory unlocked all over San Andreas after re-spawning at a hospital. This also works in a boat or in a car with the drive on water cheat activated.

This method will give Grove Street, Ballas, and Los Santos Vagos territory across the entire map. These territories won't come under attack. It is hard to take them from the rival gangs, since they will rarely spawn gang members in them.

It is possible to use this method to unlock more territory. As noted above, make sure Carl's dating Katie Zhan before attempting this glitch.

The PS2 has a glitch that may be triggered after the conclusion of the main storyline. Several territories in the El Corona area north of the Los Santos Airport will be shown to be in enemy hands (even if these territories were taken over by Grove Street earlier). Although enemy gangs will be encountered, it's not possible to trigger a gang war and take over these areas, preventing 100% takeover of gang areas by Grove Street. If possible, these territories should be taken over before doing the final storyline mission.

Territory of rival gangs besides the Ballas and Vagos made available by the aforementioned Unlocking More Territory method cannot be taken over, even if enough Ballas and Vagos members are killed in the territory to trigger a gang war.

Other gangs attacking the Grove territory

The player can make the Varrios Los Aztecas or any other gang, attack Grove Street territory. For example, first, wait for some Ballas to attack the hood. When one of the Grove's territory is attacked, lure 3 Ballas gangbangers into El Corona or Little Mexico, and kill them there. Then drive to the attacked hood. Blue points will appear on the map, either Glendales, Broadways or Hermes blocking the turf and Aztecas attacking it.

When claiming territory close to the sea, a wave of attackers can spawn in the sea bed so they won't drown, making them virtually impossible to kill. This can happen near the lighthouse in Santa Maria Beach so to avoid this, face towards the lighthouse before the next wave of attackers appear as they won't spawn in the direction the camera is facing.

In some versions of the iOS/Android release of the game, pedestrians will strangely stop judging CJ's apparel, even if held at gunpoint and/or stood next to for a long time. This glitch appears to happens both times when Gang Warfare is unlocked, although it stops happening until Home Coming is complete.