GTA Wiki
Register
Don't have an account?
Sign In
Advertisement
in: Vehicles, Vehicles in GTA Vice City, Vehicles in The Lost and Damned,
and 10 more
English

“Whether you're filling it with buddies or filling it with bodies, it's good to have some room in the back. Believe in experience and buy the van that's seen more crime scenes than network TV - the Declasse Gang Burrito.”

Much like the Hoods Rumpo XL in Grand Theft Auto III, the Grand Theft Auto: Vice City rendition of the Gang Burrito is essentially a Burrito belonging to the Streetwannabes, with a two-tone red and gray paint-job, graffiti on the side panels, side exhausts, roof-mounted lights, a heightened rear spoiler, extended front splitter and wheel arches, and a different grille design (vertical slats instead of a grid). In later versions of the game, most notably the 10th Anniversary version, the graffiti is replaced by more professional artwork. The Gang Burrito is sometimes seen with a small brown teddy bear affixed to the grille or roof; the roof-mounted teddy bears have a hockey mask.

As before, the The Lost and Damned rendition of the Gang Burrito is adapted from the game's Burrito van, thus is made by Declasse. As the Burrito was redesigned to lack its predecessors' sporty design, TLAD's Gang Burrito reinstates some of these elements to distinguish itself from the conventional GTA IV model.

The Gang Burrito's modifications include additional mud guards, a modified front bumper, roof-mounted lights and antennae, a rear spoiler, side exhausts, wider tires, billet grilles over its headlights and tail lights, a bull-bar, and The Angels of Death insignia's on the side panels and the rear, as well as an AOD plate on the rear bumper, where a standard license plate would be.

The Gang Burrito features one of several faded dark colors and is rusting in places, with a secondary color in the hood and part of its roof, where the mounted lights and antennae are seen.

The vehicle now uses a black body with red rims and a red aileron, along with the Lost MC insignia on either sides and the driver-side rear door. Adittionally, this version has four functional roof lights.

A second version appears exclusively in Grand Theft Auto Online as part of the Heists Update. It is distinguished from the Lost MC variant in that features a slighty different bumper, a standard single rear exhaust, opposed to the double side exhausts of the Lost MC version (though these can be added at Los Santos Customs), and does not have the Lost MC logos on the sides. Instead, it is replaced with colored stripes that passes on the middle of the vehicle, surrounding the entire bodywork (from front to rear).

The gang-less version resembles the van used in the 80's TV show the A-Team, with the most notable difference being that the stripe does not go up towards the back. 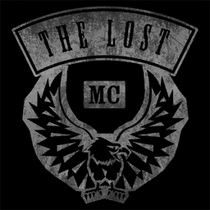 As the regular Burrito already has impressive performance for a van, the changes of the Gang Burrito make it the fastest van in the game.

The Gang Burrito has the same engine sound as the Infernus, Banshee, Phoenix, Love Fist, and the Deluxo.

Performance-wise, the Gang Burrito is poor, boasting an only average top speed with moderately poor acceleration, as well as a boasted torque that helps more to make the van difficult to control. Its lack of grip on the road, possibly attributed to its small tires, may also explain its poor steering. The engine has a large amount of power and the vehicle sometimes wheelspins upon rough set-offs, especially on rough terrain, something not present on the regular Burrito in GTA IV. In terms of acceleration, the Burrito proves poorly, but a minor improvement from the regular Burrito. The exhaust configuration appears to be a twin-exit, twin exhausts mounted down the sides of the van.

The Gang Burrito is powered by a single cam Inline-4 laid transversely, coupled to a 5-speed gearbox in a rear-wheel drive configuration. The engine sound appears to be similar to its civilian counterpart, but emits a louder, rougher engine noise, indicating the van's engine has either been tune or modified, or has suffered from wear and tear.

The Gang Burrito performs much better than it did in its predecessor. Although steering is not among the best in the game, the Gang Burrito remains as the fastest van in GTA V, and a good vehicle all around. Handling is much improved, as well as acceleration and top speed. It can seat four people, two of which will enter from the back doors and will be able to shoot from there, making it deadly for other cars to follow a Gang Burrito with passengers in the rear.

The standard variant appears to perform significantly better than the Lost MC variant, although it seems to have lower top speed, according to the files. Still, the civilian variant of the Gang Burrito can be customized at Los Santos Customs, where it greatly benefits from the performance boosts.

Some members of The Lost stand alongside a Gang Burrito in GTA V. 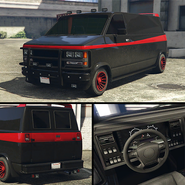 The Standard Gang Burrito in the cinematic preview on Rockstar Games Social Club.