Location on the map (red) in Grand Theft Auto IV

Galveston Avenue is a street featured in the HD Universe rendition of Liberty City, and is featured in Grand Theft Auto IV and its episodes.

Galveston is a 20-block long north-south street in Algonquin, located near Middle Park, and is the fourth-longest street in Liberty City. It runs through Northwood, North Holland, Varsity Heights, Middle Park West, Purgatory, Westminster, The Meat Quarter, and Suffolk.

Galveston runs both ways throughout its entirety, with the exception of the block between Wardite and Xenotime, where it runs northbound-only (with southbound traffic from Grummer Road turning east on Xenotime).

It is likely based on New York's Ninth Avenue. 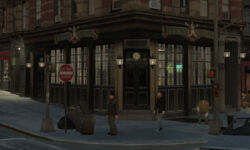 Leroy's Barber Shop on the corner of Lorimar.

Hinterland at the same place as the Hercules gay club.