Galileo Park, Vinewood Hills
“Set up high in the Vinewood Hills with stunning views of the city, the Galileo Observatory was constructed at the end of the 19th century to make astronomy more accessible to the general public, but mostly now serves as a reminder of what little progress has been made in space exploration in the past 40 years”
— GTA V digital manual

The observatory is located in Galileo Park, Vinewood Hills, north of Los Santos, and is accessed from East Galileo Avenue. It is based on the real life Griffith Observatory in Los Angeles, California. It is named after Galileo Galilei, an Italian astronomer, physicist, mathematician, and philosopher, who made great strides in the improvement of the early refracting telescope.

It sits in a fairly central position atop one of the highest points in Vinewood Hills; this naturally commands the observatory with a far reaching view across all of Los Santos, also making it a popular tourist attraction and place of interest in San Andreas. A concrete sculpture can be found in front of the observatory, a replica of the real life Astronomers Monument in front of the Griffith Observatory. The real life Monument also features a depiction of Galileo Galilei, whom the in-game observatory is named after. Backpackers and trippers can be found in the Arthur's Pass Trails, located north of the facility.

The observatory as seen from East Galileo Avenue.

View of Los Santos' skyline from the observatory.

Michael and Franklin at the Galileo Observatory.

Artwork of Dave Norton with the Galileo Observatory in the background.

The observatory as seen in the enhanced version (PS4 and Xbox One).

The Galileo Observatory next to its real life counterpart, the Griffith Observatory. 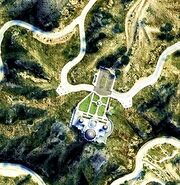 The Protagonists overlooking Los Santos at the Observatory at the end of the Doomsday Scenario.