In-game time
“Quick, quick, I need your help. These idiots emailed me a list of cars, and where they're parked. It's the mother lode! Top drawer premium stuff! Get them all before they figure out what happened, and I'll pay you a fraction of what they're worth. The boat will be leaving soon so hurry!”

GTA Today is a mission in Grand Theft Auto Online given to the player by Simeon Yetarian. It is available for 2-4 players.

Simeon has been emailed a list of four cars and where they're parked. The team must deliver all four cars to the dock in 10 real-time minutes. Simeon will give the team two cars to collect first.

The Super Diamond is parked outside a manor on Sam Austin Drive in Richman, and is guarded by many Security Guards.

The Cheetah is parked near the Vanilla Unicorn strip club, blocked in by many other parked cars.

Once collected, the cars need to be delivered to the docks in Elysian Island. Once both cars have been delivered, Simeon sends an order for the other two cars.

The Turismo R is parked in the middle of Rancho Projects on Jamestown Street in Rancho. It is surrounded by many members of the Los Santos Vagos.

The Stinger GT is parked on Alta Street in Downtown Vinewood. It is surrounded by police, having seemingly been pulled over by them.

Both Turismo R and Stinger GT also have to be delivered to the same docks as the Super Diamond and the Cheetah. Once they have been delivered, the mission ends. 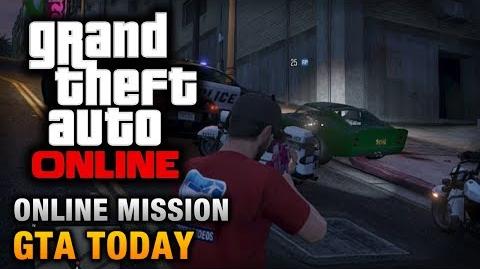