Name chosen by the player

Name chosen by the player

Player (optionally, via microphone)
None (officially)

"I am honored to call you my son... By another mother, if you know what I mean?"
―Simeon Yetarian to the male online player.

In Grand Theft Auto Online, the protagonist is a player-created character, with highly customizable traits.

Very little is known about the player's background, other than that they met Lamar Davis on Lifeinvader and took a flight to Los Santos, presumably just to take part in a street race in Vinewood organized by Lamar. The player does not return to their old home, staying in Los Santos.

The player is first seen in the initial cinematic tutorial of Grand Theft Auto Online, and meets Lamar Davis when he picks the player up after their arrival in Los Santos from the airport. The two had met on Lifeinvader and became close friends.

They enter Lamar's Emperor, where he gives the player a pistol and welcomes them to the city. If the character is female, a different cutscene is shown where Lamar will try to hit on the protagonist but fails. Lamar drives the player to a Vinewood parking lot, where they begin to race, potentially with other players competing. Regardless of who wins the race, Lamar sees further potential in the character and introduces them to Gerald, a drug runner living in Davis. Gerald immediately employs the character by asking them to ambush a deal between the Ballas and the Vagos and return the product to him.

Lester Crest will eventually contact the player character if they purchase a high-end Apartment and get enough reputation. Lester will introduce the player to various heists that are given by different contacts, such as a drug dealer and a government agent. The player is required to form a team of two or four players for each heist in order to progress through them. The team is hired to perform various tasks, such as breaking a prisoner out of jail or helping finance a drug startup and even robbing one of the biggest banks of USA.

After gaining enough reputation, Lamar will introduce the player to Benny and hire them to help him rise to power in southern Los Santos. Lamar employs the player to sabotage rival gangs, for example hiring them to crash a Vagos funeral or perform drive-bys on the street. However, continued failures to achieve Lamar's original plans lead him to step down from his attempt to take control of the area.

After gaining at least $50,000, the player character is able to create and manage their own Organization. Organizations are run through the SecuroServ network and are created by players in Free Mode. They then have multiple options from which to choose, such as hiring and firing other players as bodyguards. These bodyguards then work for the player and help them to generate an income from the organization, through various tasks including recovering impounded vehicles from the police and retrieving packages across the state.

The player character is eventually allowed to purchase an Office, which allows them to permanently access their Organization and introduces them to the Executive Assistant. The player can further expand their criminal empire by buying, storing, and selling coveted contraband including jewelry, counterfeit goods, and medical supplies.

Similar to Offices, the player is eventually allowed to purchase a Biker Clubhouse, which allows them to run their own Motorcycle Club as a President. When the player first enters their Clubhouse, they are introduced to Malc, who helps the player set up their Motorcycle Club. The player's Club, similar to Organizations, can create profit by running odd jobs and managing Businesses that create narcotics and counterfeit goods. The player can hire up to seven additional players and promote them across a hierarchy within the Club.

Import/Export expands on Further Adventures in Finance and Felony, continuing the player's business tycoon hosted by SecuroServ. The player is given the opportunity to purchase Vehicle Warehouses that store stolen vehicles; the player is tasked with stealing, modifying, and selling the vehicle themselves, and can choose to have other player Associates assist them. The player is also able to undergo Special Vehicle Work for SecuroServ that involve the player using highly modified, specialized vehicles to perform various missions.

It is unknown what happened to the character by the time Grand Theft Auto V takes place. Lester still seems to be in touch and is implied to still be working with the character, and even considered them for the jewelry store robbery, but claims that "they're too unpredictable".

The online player, as shown in cutscenes, seems to be very calm and quiet when dealing with their bosses. They will take on any job as long as they get paid for their services (much like Claude in Grand Theft Auto III). They are known to keep their cool and are almost impossible to intimidate. This is best shown when the player first meets Trevor Philips, who initially comes nose to nose with the Online Player and the Player shows no sign of backing down from him and is clearly not afraid of Trevor, unlike most other people in the game.

As with many other playable characters with in the GTA universe, the Online Player's psychosis is determinant on the player's actions, and is only evident when killing civilians or other players. This is represented in-game by the player's radar blip, which progressively turns from white to red depending on how psychotic the player is. It can be assumed from this that the character's personality is entirely determined by the player.

It is also slightly implied that the protagonist is a psychopath, as while flying in a helicopter with a Merryweather pilot, he will say "So did you always want to be a psychopath or did it develop slowly?"

The player can choose their parents during character creation, which will affect the player's initial appearance (a loose composite of both parents, with variable influence). There is also a choice of grandparents for each parent (a composite of both grandparents), which affects their appearance, in turn affecting the protagonist's appearance. In addition to generic people to choose as parents, there is also the choice of well-known characters from Grand Theft Auto III, Grand Theft Auto IV, and the protagonist of Red Dead Redemption, to be used as parents.

The Player and Lamar.

The Player getting a haircut.

A female Player firing a Pistol. 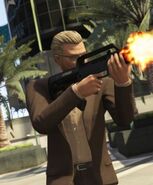 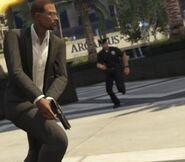 A player armed with an AP Pistol.

A male Player firing an SMG.

GTA Online customization for PS4, Xbox One and PC.

The character swap screen in the enhanced version, simulating a police ID line-up.

Lester speaking to the players.

The players meeting with Karen.

The player busting out Rashkovsky.

Protagonist standing in front of the Pegassi Osiris.

Two protagonists celebrating after a Heist.

Retrieved from "https://gta.fandom.com/wiki/GTA_Online_Protagonist?oldid=999706"
Community content is available under CC-BY-SA unless otherwise noted.