Players who logged in during the event were added to a "Guest List"[2] and are qualified for a GTA$300,000 bonus cash award and an Orange Wireframe Bodysuit.[3] Bonus cash awards will be deposited no later than July 9th[3].

Qualified players who log in on each subsequent week will be awarded with exclusive rewards, including:[4] 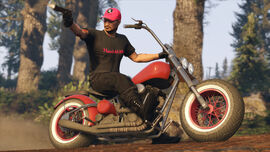