View source
watch 02:52
Roblox: DeepWoken - The Loop
Do you like this video?
Play Sound
For the heist itself, see The Cayo Perico Heist

“It’s time to raise the stakes higher than ever before. You’ve broken a convicted spy out of Bolingbroke Penitentiary. You’ve saved the world from an egomaniacal tech billionaire. And you’ve beaten the odds to drain a casino of its cash. This time, you’re taking on an entire island.”

The first hint of this DLC came on the November 12th as a mysterious text message from Tom Connors and the addition of construction props by a service door on the north side of The Diamond Casino & Resort.[2] The next week, on November 19th, a teaser was uploaded on the Rockstar Games twitter account[3] and a dead, mutilated body with a briefcase appeared at random locations along the shoreline of Vespucci Beach. The next day, Rockstar released a teaser trailer on the Newswire along with the official title of the upcoming DLC and various information about its content. On December 5th, Rockstar announced through the Newswire the future opening of a new venue located under The Diamond Casino and Resort: The Music Locker.[4] After four days, on December 9th Rockstar released an additional newswire post alongside a new trailer.[5] One day later, on December 10th Rockstar released another newswire post, which stated that the Cayo Perico Heist DLC was the biggest musical update since launch, and that it will include three new radio stations (Still Slipping Los Santos, Kult FM 99.1 and Music Locker Radio), and new remixes for two existing stations (FlyLo FM and WorldWide FM).[6] The update was eventually released on December 15th.[7]

“Plus you can acquire new vehicles and tactical weapons, experience new social spaces to dance and party in with your friends, and new world-class guest DJs, and listen to new radio stations with over 100 new songs. Oh, and a very large, very versatile, and very heavily armed submarine HQ with plenty of other surprises.”

A privately-owned island off the Caribbean coast of Colombia.

“It’s up to you to find a way to breach Cayo Perico, one of the most secure private islands in the entire world, evade or neutralize the heavily armed security forces stationed there, and escape with valuable evidence along with as much art, gold and drug money as you can carry.
Choose your tools. Choose your approach. Choose your crew – or even go it entirely alone. Just make it back to Los Santos in one piece.
The Cayo Perico Heist is the biggest GTA Online adventure ever, introducing an all-new exotic Heist location, with a brand-new approach to Heist design that features the ability to play everything solo or with up to three other players.”

The player is directed to meet with Miguel Madrazo in The Music Locker underground nightclub at The Diamond Casino & Resort, where he provides some background on Juan Strickler and his dealings with the Madrazo Cartel. English Dave appears and adds more background on El Rubio's penchant for extravagant dance parties on his private island. Miguel enlists the player to retrieve incriminating documents from Cayo Perico using a submarine as a planning base. Pavel adds more information to the player's understanding of El Rubio when they purchase a Kosatka.

Several new Awards related to The Cayo Perico Heist have been added to GTA Online, including the opportunity for players to earn up to 1.4 million in bonus GTA$ for various Heist challenges.

Hidden Caches daily collectibles have been added to the game. There are ten scattered throughout the state of San Andreas each day, all located underwater. They can be collected with or without a vehicle, and each will give the player $7,500 and 500 RP upon collection.[8]

“Buckle up, strap in, and put your helmet on — there’s eight new Stunt Races making their way to GTA Online this week. Whether you prefer to be a part of a blur of tuned-up sports cars rocketing past on the freeway, motorbikes hurtling around the Palmer-Taylor Power Station at full tilt, or supercars pushing the physical envelope in gravity-defying courses, these brand-new tracks have a little bit of something for the adrenaline junkie lurking within all of us.”

“This week brings seven new arenas to the cutting-edge game mode across some of the city’s most notorious landmarks.”

Seven new Deadline maps were added to the game during the Deadline Week event. The following jobs were added:

“A wave of chaos and violence is sweeping across the Los Santos area — swarms of armed invaders are laying siege from the La Puerta scrapyard to the Vespucci Canals. Strap up and battle the Ballas, Vagos and more across seven new Survivals, out now.”

“Alongside the grand opening of The Music Locker and its new slate of resident DJs, GTA Online’s musical universe further expands at the launch of The Cayo Perico Heist with the addition of three new radio stations, as well as brand new mixes arriving on hit stations FlyLo FM and Worldwide FM, for a whopping total of over 250 new tracks, making this the biggest ever musical update to GTA Online.”

3 New stations are added, although one won't start broadcasting immediately and one is only initially available in Mirror Park.

“Grammy nominated producer and Los Santos beatmaker supreme, Flying Lotus is back with an all-new mix added to rotation on FlyLo FM, featuring guest appearances from Tierra Whack plus new tracks from Madlib, brand-new material from FlyLo himself, MF DOOM and a bunch of rare, exclusive and amazing surprises.”

“Globally renowned DJ, Gilles Peterson returns to add a new mix of New London Jazz, disco and world music for Worldwide FM featuring tracks from Kamasi Washington, Khruangbin, BADBADNOTGOOD and MF DOOM plus many, many more.
To keep the returning stations feeling fresh and to give everyone a chance to find some new favorites, FlyLo and WorldWide FM will be bumping the all-new mixes and tracks only for a period after launch, with the classics mixed back in over time.”

FlyLo and WorldWide FM both receive updated track lists. These played exclusively from the launch of the DLC until the Manchez Scout Week on January 14, 2021, when the old track lists were integrated back into the stations. Both stations then played all their old tracks followed immediately by all the new tracks.

This update added a total of 20 new vehicles:

Five new styles of Blackjack tables and four new styles of Three Card Poker tables are available for purchase for players who own a Casino Penthouse and the Private Dealer. They can be purchase from the Casino Shop using Chips and equipped using the Interaction Menu.

Exterior view of the clifftop mansion.

View from a balcony.

Another view of the beach.

Two dinghies with a jeep-like vehicle passing by in the center.

Air travel, and a jeep-like vehicle.

An old-style military truck with two vehicles resembling the Squaddie. 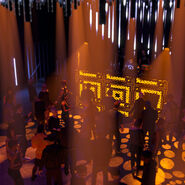 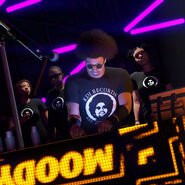 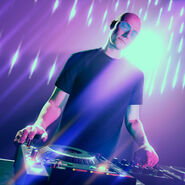 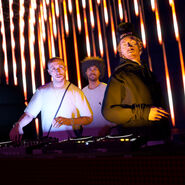 Keinemusik at the beach party.

Unnamed celebrity in The Music Locker.

Moodymann at The Music Locker.

Sniper on a security tower.

Rappelling from a stealth helicopter.

Throwing a grappling hook over a wall.

A glass cutter and valuable sculpture.

Guided missile launching from the submarine.

Keinemusik at The Music Locker.

Gold scattered around the island.

Welcome to the island.

Island overview from the air.

Toreador with the Shark Camo Livery.

APC with the Trees Camo Livery.

Nightshark with the Pink and Green Camo Livery.

Anti-Aircraft Trailer with the Galaxy Livery. 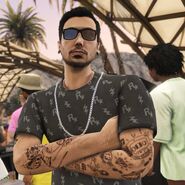 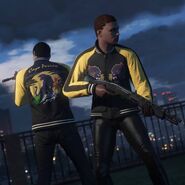 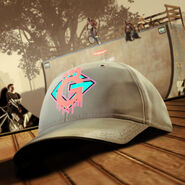 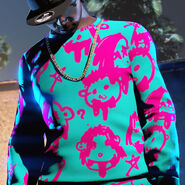