Start a Wiki
watch 00:59
GTA Online: Smuggler's Run Trailer
Do you like this video?

"With a name that’s a nod to an early classic from the Rockstar Games catalog, Smuggler’s Run opens up the air corridors above Los Santos and Blaine County, providing new business opportunities while introducing a range of planes, choppers and even ultralights as highly viable options for transporting criminal cargo across the state – simultaneously opening up some creative new methods of dispatching any rival gangs along the way."
―Rockstar Newswire.

The update has the GTA Online Protagonist working with Ron to smuggle contraband across San Andreas.

The Ultralight glider.
Add a photo to this gallery 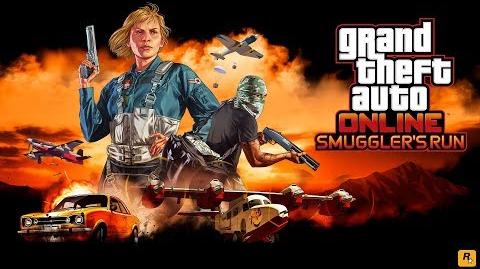 Retrieved from "https://gta.fandom.com/wiki/GTA_Online:_Smuggler%27s_Run?oldid=1014286"
Community content is available under CC-BY-SA unless otherwise noted.