GTA Online: Lowriders is a content update for Grand Theft Auto V and Grand Theft Auto Online, exclusive to the Xbox One, PlayStation 4 and PC ports of the game. It was released on October 20, 2015.

The update introduces Benny's Original Motor Works, a new mod garage in downtown Strawberry that offers a huge range of interior and exterior customization. Along with eight new missions for Lamar Davis, are two new weapons, the fully automatic Machine Pistol and Machete, and a fourth purchasable property. Also featured are many new clothing, hair, and accessory options as well as three new Adversary Modes, and much more.

Eight new missions are available for Lamar Davis. Unlike regular contact missions, these form a vague storyline and will first be offered to the player in a set order (although they can still be played out of sequence by accepting invites from other players).

Two new weapons are available. Unlike the vehicles and Benny's Original Motor Works, the weapons are also available in Grand Theft Auto V.

Note: The 'Custom' variants are not purchasable from websites and are an optional upgrade on their standard versions. 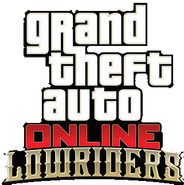 A modified interior of the clean Voodoo.

Lamar in another screenshot.

A player modifying his car in Benny's garage.

A player performing a Drive-By Shooting in a Primo Custom.

A lowrider with hydraulics.

Multiple lowriders at a car meet.

Side view of a Buccaneer Custom.

A Buccaneer Custom and a Machete.

A garage full of Custom Vehicles. 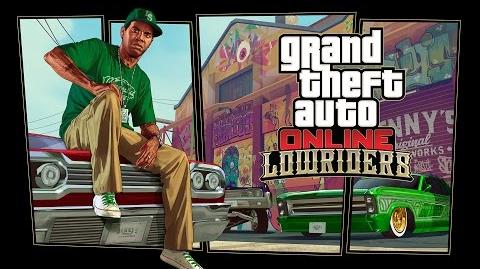 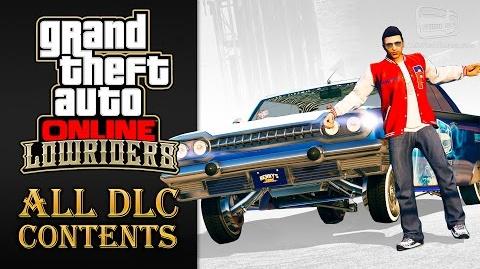 Retrieved from "https://gta.fandom.com/wiki/GTA_Online:_Lowriders?oldid=983870"
Community content is available under CC-BY-SA unless otherwise noted.