Executives and Other Criminals Trailer Soundtrack (Wham! - Everything She Wants)

GTA Online: Executives and Other Criminals is a content update for Grand Theft Auto Online, exclusive to the Xbox One, PlayStation 4 and PC versions of the game. It was released on December 15, 2015.

This update includes new customizable Penthouse Apartments, Stilt Apartments in the Vinewood Hills and the extravagant, fully staffed, and upgradeable Galaxy Super Yachts. It added several new vehicles, including luxury vehicles with armored variants. It also features a new Adversary Mode, Extraction, and the ability to create your own criminal organization, with paid bodyguards to protect you.

Players can now buy up to five properties, giving them the potential to store up to 50 cars and 15 bicycles across all properties. New Penthouse and Stilt Apartments were also added on the Dynasty 8 website, these have a gold banner at the bottom of their image stating whether they are a Penthouse or Stilt Apartment.

The following Stilt Apartments are available:

Penthouse Apartments can be customized with one of 8 themes while the player is buying them on the Dynasty 8 website. Each theme has a picture of a room representing it.

The following themes are available:

Alternate themes are only available in the following three apartments that were added: 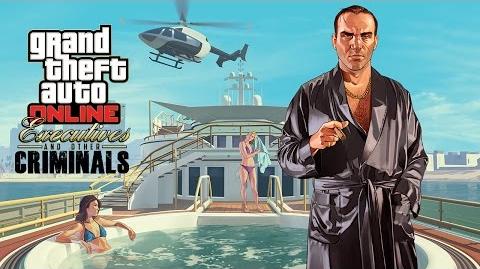 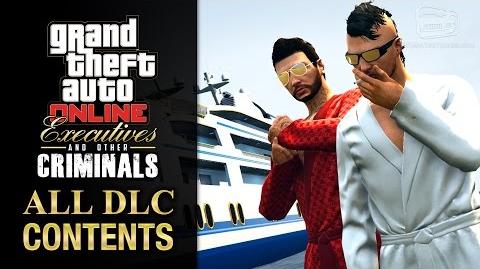 GTA Online Executives and Other Criminals Update All DLC Contents

Retrieved from "https://gta.fandom.com/wiki/GTA_Online:_Executives_and_Other_Criminals?oldid=1268508"
Community content is available under CC-BY-SA unless otherwise noted.