"It's a buyer's market as rival groups attempt to deliver Buckingham military jets to LSIA. They're vintage collectors' items and they fly like that, so use Lazers for defence and attack. Each team will only have one Buckingham in play at any time. Start points are Fort Zancudo and Sandy Shores Airfield."
―-Match description

It takes place across the entirety of the map, with the main locations being the Sandy Shores Airfield, Fort Zancudo and Los Santos International Airport. The Job is unlocked at Rank 1.

The two bases are located opposite each other on the tarmac of LSIA, one on the left runway, and one on the right runway. The aim of the game is to steal Miljets from Fort Zancudo. Strangely, one player will spawn in Fort Zancudo (making reaching the base easier), and the other will spawn at Sandy Shores Airfield, meaning they will have to fly over Fort Zancudo.

Once the player has a Miljet, they must take it to their base, the other player will either be chasing you, attempting to shoot you down before you reach the airport, or they will be collecting a Miljet as well.

Once the plane is delivered to your base, several Besras will be next to your base for use to fly back to Fort Zancudo and collect another plane.

No weapons are on the map, except the cannons and rockets present on the Lazers that are present at Sandy Shores Airfield. 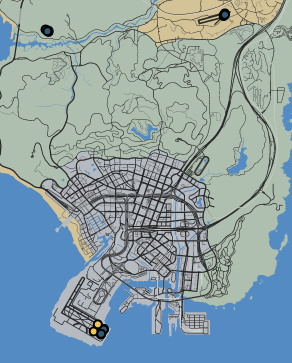 Retrieved from "https://gta.fandom.com/wiki/GTA:_Wingmen?oldid=1212887"
Community content is available under CC-BY-SA unless otherwise noted.