Standard White - 100%
“If you're looking for a car that puts function ahead of form, you're in the wrong boutique. Sure, you can try to drive the GT500 straight from A to B. But on the way, you'll find you're taking in pretty much every other letter of the alphabet, and they're spelling out something obscene in Italian. Your only choice is light a cigarette, strike a pose, contemplate how stunningly attractive this car makes you look, and enjoy the ride.”
— Legendary Motorsport description.

The Grotti GT500 is a classic sports car featured in Grand Theft Auto Online as part of the The Doomsday Heist update, released on January 16th, 2018, during the GT500 Week event.

The vehicle is evidently based on the Ferrari 250 GT SWB, with a split front grille derived from the BMW 507. The smooth, rounded rear and taillights resemble a similar design found on the 1965 Lancia Flaminia Sport Zagato.

The vehicle's shape and layout is reminiscent of the Stinger and Stinger GT, which can be considered closely related. The front end of the car is slanted in shape and features a small bumper with a chrome finish. Above the same bumper, there is a dual meshed grille spanning about two-thirds of the car's width, which bears a chrome finish on the surroundings and the central divider, while the outer edges house circular lamps with chrome detail around the units, with the upper ones being larger and placed above the smaller lamps. The bonnet area is relatively curved around the front and has a central long intake on the engine compartment, as well as the Grotti emblem ahead of the same.

The sides of the car are relatively simple, featuring a set of amber indicators near the front quarters and small vents between the front wheel arches and the doors, fitted with dual horizontal separations finished in chrome. The doors have horizontal door handles and classic circular rear-view mirrors, both of them also finished in chrome. The greenhouse area assumes a tall design with a sloped rear, featuring chrome trim around the windows, leaving thin coloured portions on the A-pillars.

On the rear end, the boot lid houses a dedicated section for the license plate, as well as silver "GROTTI" lettering above. The outer edges house circular tail lamps with chrome detail around the units, which consist of small amber indicators located within the red main/brake lamps. A small bumper with a chrome finish protects the rear end and the rear quarters of the vehicle, while dual-exit, dual chrome exhaust tips are seen below the car's body.

The vehicle features a classic wooden interior similar to the Stinger. However, the dashboard has been reconstructed and is completely unique to this vehicle. It also has dials reused from cars like the Dominator and the Buccaneer, and a unique wooden steering wheel shared with the 190z. The Grotti emblem can be seen on the centre of the steering wheel.

The vehicle only has access to a primary colour, which is applied on the bodywork, the uncovered sections of the dashboard and the steering column. Although not accessible, a trim colour is also available for the overstitches on the lower centre and the seats, which is set to black in purchased examples and white in naturally-generated examples (such as those from Content Creator and the one that may appear in the Casino Work mission Judgment Call). Its wheels are similar to the ones used in the Stinger and the Stinger GT, being a derivative of the "Wired" lowrider wheels seen in Los Santos Customs, wrapped in high-profile tyres. 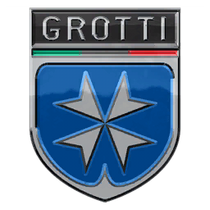 The car performs relatively similar to other classic sports cars, with nimble handling and soft suspension. It holds a very high top speed, owing to its powerful engine and its nature of being a touring car.

The GT500 is powered by a single-cam V8 fitted with carburetors/throttle bodies, whose sound is a mixture of several engine sounds, including the original deep-tone muscle car sound found on the Dominator and the Vigero. The engine sits in the front, coupled up to a 5-speed manual gearbox in a rear wheel drive configuration. 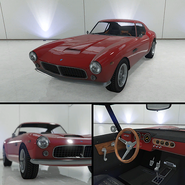 The GT500 on Legendary Motorsport.

The GT500 on the updated Rockstar Games Social Club.

The GT500 in the cinematic preview on Rockstar Games Social Club. 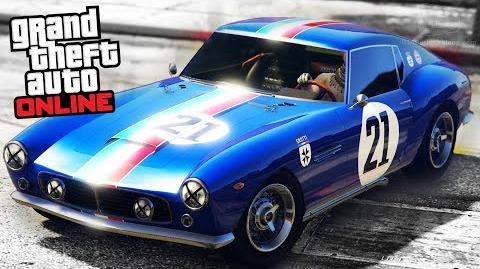