Standard White - 100%
“Seasons will change, fashions will come and go, economies will tank, the wholesome popstars of today will be leaking their own bondage tapes tomorrow - but the GP1 will always remain. This is what defined supercars for a generation, perhaps for all time: as pure and flawless as the smile of a newborn, or a crystal of perfectly refined meth, or the smile of a newborn experiencing perfectly refined meth.”
— Legendary Motorsport description.

The Progen GP1 is a two-door supercar featured in Grand Theft Auto Online as part of the Cunning Stunts: Special Vehicle Circuit update.

The vehicle is evidently based on the McLaren F1, seen in the overall shape, headlamp panels, side strakes, roof scoop and rear end, while the headlamp layout and the small bonnet intake appear to be similar to those from the Saleen S7. The dash cluster and white dials are also based on the F1, although the GP1 does not feature a central driving position. Some of the modifications were taken from the McLaren F1 LM or the McLaren F1 GTR, both motorsport variants of the F1. The GP1 can be considered a production version of the Tyrus, since the McLaren F1 GTR Longtail is a derivative of the original McLaren F1, although the GP1 features a fully redesigned car model, not sharing any components with the Tyrus's body.

The GP1 features a small bumper with a large intake on the centre and two smaller ones beside it, followed by a wedge-shaped upper area that houses the headlamps and the vented bonnet. The headlamps themselves are located in black housings with glass casings and plastic trim, each one consisting of twin circular main lamps, a smaller white light on the outer side and a small turn signal just above it. A modern Progen logo is featured on the front.

Along the side profiling, the vehicle sports heavy strakes embedded into the door panels, along with small intakes leading to the rear brakes. The cabin area makes use of plastic trimmings around the windows, a single windscreen wiper, body-coloured mirror shells and upper door handles. Like the Tyrus, the vehicle features butterfly doors, as seen by the roof hinge, while the central area is occupied by a roof scoop. The rear area is occupied by an engine compartment with a central vented cover, which hinges from the front and revealing to have inner windows separating the interior from the engine bay.

The rear of the car consists of a vented panel presumably for the gearbox/diff, while a rectangular section can be seen next to it. The rear end features dual circular tail lamps with smaller units within them, a rectangular black vent holding the license plate, a rounded open vent below it and vertical vents below the tail lamps. The lower area is occupied by the twin exhausts on the outer edges and the carbon-fibre diffusers on the centre. The classic Progen logo and the GP1’s badging is featured on the rear, both of which are also featured on the engine.

The GP1’s interior is unique, featuring a combination of leather finish with carbon-fibre details. The dial cluster uses unique dials and gauges with a white base colour, with the gauges on the left side and the main ones on the centre and the right side, together with the warning lights. The console next to the dial cluster features various switches for the basic vehicle functions, while the steering wheel uses a carbon-fibre steering column and a bolted-on, carbon-fibre circular panel with the Progen logo on it. The central column between the seats have carbon-fibre sections with a dedicated space for the gearbox and the additional switches. The doors have a carbon-fibre detail with speakers on them, while the seats have a unique curved design, bearing the Progen logo on the outer sides.

The primary colour of the car is applied on the body, while the secondary colour is applied on the panels above the headlamps, a detail above each headlamp set, the trimmings of the mirror shells, the details of the key holes and a rear frame on the engine bay. A trim colour is also available for the interior stitching, lower half of dashboard, part of the doors, the details on the central column, the borders of the seat emblems and the seat belts. The stock rims are of a unique design, consisting of six spokes with rounded spaces and the GP1 badge on the centre. The details inside the grooves and the central bolt support an additional wheel colour, although only examples spawned in the Content Creator have coloured rims.

Though the GP1 does not come with a spoiler as stock, one can be added at Los Santos Customs that resembles the McLaren F1's stock active spoiler; however, the spoiler is shown in the Legendary Motorsport gallery. 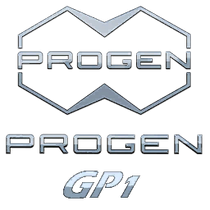 Being a production version of the Tyrus, the vehicle shares many aspects, including the overall handling. The vehicle possesses a high top speed and quick acceleration thanks to the powerful engine, however still slightly less capable than the Tyrus.

The GP1 is powered by a V12 engine, supported by the intake manifolds having six inlets per row, coupled to a 6-speed gearbox in a rear-mid engine, rear wheel drive. The engine sound is also shared with the Tyrus, albeit with an edited tone.

Official pre-release screenshot of the GP1.

Teaser pre-release screenshot of the GP1. 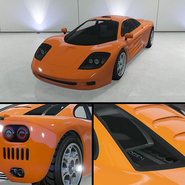 The GP1 on Legendary Motorsport.

The GP1 on the updated Rockstar Games Social Club.

The GP1 in the cinematic preview on Rockstar Games Social Club.

Alternative badge used in the adverts, which is a direct homage to the McLaren F1's rear badging. 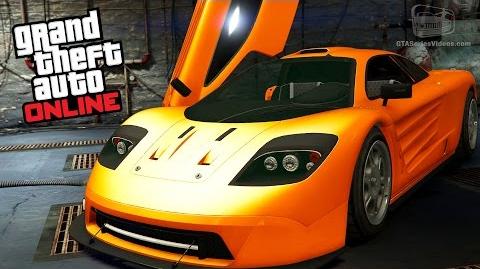