The "GIGN" name is derived from the internal files of GTA Vice City.

The GIGN and DGSE appear twice in GTA Vice City, mainly, during Mall Shootout and All Hands On Deck!. The missions, which are given by Colonel Cortez, relate to Cortez's conflict with French authorities over the illegal purchase of chips (which are properties of the French government presumably to be used for military equipment). The situation escalates to the point when Cortez is forced to flee Vice City to an unknown country.

During Mall Shootout, GIGN units intervene in a deal between Tommy Vercetti and Pierre La Ponce, forcing the dealers to flee from a hail of gunfire from the GIGN. The units are easily confused with the VCPD SWAT, due to similar uniform and voice. In All Hands On Deck!, Cortez is forced to flee the city on his yacht after learning that the French are closing in on Cortez. French DGSE agents attempt to block his escape and kill or apprehend Cortez, but their attempts are thwarted by Vercetti, who helps Cortez flee Vice City by killing a number of French personnel. During an early cutscene in the mission, DGSE agents may be seen arriving at the marina in a special black colored Washington, which are obtainable by the player but only if they fail the mission. Other vehicles used during the mission include various boats, as well as two Mavericks, and a Hunter, all of which are also destroyed by Vercetti. 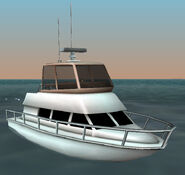 Hunter
Add a photo to this gallery

Pistol
Add a photo to this gallery

Closeup of a GIGN operator

DGSE agents (complete with a black Washington) arriving at the marina just as Cortez is departing during "All Hands On Deck!"

Closeup of a DGSE agent
Add a photo to this gallery

Retrieved from "https://gta.fandom.com/wiki/GIGN_and_DGSE?oldid=1247762"
Community content is available under CC-BY-SA unless otherwise noted.