Standard White - 100%
“The GB200 is an icon of that golden age of sports car design: a mid-engine, four-wheel drive rocket built with the power of a modern supercar and the handling, brakes and safety features of an angry dog. You can play it cool all you like: no matter how many times you take it over 100, the moment the turbo kicks in will have you clenching so hard you won't know if that was an ecstatic climax or a messy follow-through.”

The GB200 is based on the Ford RS200, based on the overall design and name. It also takes elements from the pre-facelift second generation Subaru Impreza, most notably the headlights and grille.

Depicted as a small rally-oriented sports car, the GB200 is easily distinguished by its lightweight and aerodynamic bodywork. The front bumper of the car has a plastic extender at the bottom that spans the entire car's width, a rectangular mesh intake with a license plate over it and two sections holding circular fog lights. The upper area has a thin meshed grille that has the same width as the bumper intake and bears the Vapid logo on the center, while the outer edges have the main circular headlights. The hood area has a curved profile and has two protruding sections for the headlights and two small intakes around the center, which hinges from the front and opens to reveal a storage for a spare wheel, similar to the Monroe and the Tropos Rallye.

On the sides, the car makes use of flared fender arches, whose upper halves are part of the front spare wheel compartment and the rear engine compartment. Large skirts can be seen on the lower sides, which are defined by the seams that are aligned with the lower door line. The lower halves of the rear fenders have small intakes intended to cool off the rear brakes, while the colored ridges define the separation between the main body and the front/rear compartments. The cabin area features black trim around the windows, colored mirror shells and a wide roof scoop.

The rear section mainly consist of large intakes behind the cabin intended to direct airflow to the engine bay, an elevated section forming a ducktail spoiler at the end and a rear window exposing the roll cage and engine bay. The rear end has a black panel housing the license plate on the center and the reactangular tail lights on either side, along with the Vapid emblem and the "GB200" badhing on the passenger side. The lower area is mainly predominated by the twin exit vents and the two-element plastic diffuser at the bottom. This entire section also serves as a rear clam for the engine, which hinges from behind the cabin and opens to reveal two red air filters on either side, a turbocharger on the driver side and the hoses connected to the radiator on the roof. Part of the exhaust pipe is also seen behind the turbocharger, going towards the bottom of the engine bay.

The underside of the car is mostly traditional in design. However, it reveals the complex suspension setup, featuring articulated arms on the front and axke shafts with parallel trailing arms on the rear, in a similar manner to the Omnis. The exhaust pipe exits from the driver side and leads towards the rear end, just below the diffuser.

The interior of the car reuses elements from the Sentinel Classic and the Deluxo, being the dials marked over green grid patterns, the rectangular aircon units and the gear stick. However, it uses race-style steering wheel and seats.

The primary color of the car is applied on the bodywork, the mirror shells and the rear cage, while the secondary color is applied on the ridged details on the sides, the cam covers, the exhaust pipe beside the engine bay and the interior stitching. A trim color is also available for the interior, being applied on the dashboard, central section and seats. It uses a set of 12-spoke dual rims with bolt details on the outer surrounding, which can also support a dedicated color (although only examples generated in Content Creator may have a gold color).

The fog lights are not functional, but the rally lamps are. They are enabled alongside high beams, and are extremely bright.

The GB200 shows excellent traction both on and off-road, along with very good braking, agile handling and very good acceleration. However, being mid-engined, it suffers from lift-off oversteer (more commonly known as snap-oversteer), meaning the rear of the car will easily lose traction when the driver lifts off the throttle during cornering. Additionally, due to the high engine resistance, the GB200 suffers from a relatively low top speed compared to other cars in its class.

On loose gravel and dirt trails, however, the GB200 is incredibly stable and composed, aided in part by its relatively smooth power delivery. The car exhibits very good grip, but has a slight tendency to understeer, most likely due to the even front/ rear torque distribution and relatively light front end of the car. The car does have a relatively low centre of mass and is therefore less susceptible to tipping onto two wheels and eventually rolling over when attacking banks off-road.

The GB200 is powered by a single-cam turbocharged V6, connected to a 6-speed gearbox in a mid engine, all wheel drive layout (with equal torque distribution). The vehicle features animated pulleys, which rotate at various speeds under throttle, similar to the Tornado Rat Rod and the Phantom Wedge. Its engine sound appears to be a higher-pitched variation of the one from the Elegy Retro Custom.

Promotional screenshot of the GB200, also used as the cinematic preview on Rockstar Games Social Club. 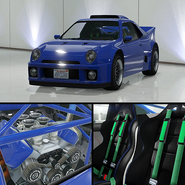 The GB200 on Legendary Motorsport. Note the different engine configuration.

The GB200 on the updated Rockstar Games Social Club.

Lucky Wheel advert for the GB200. 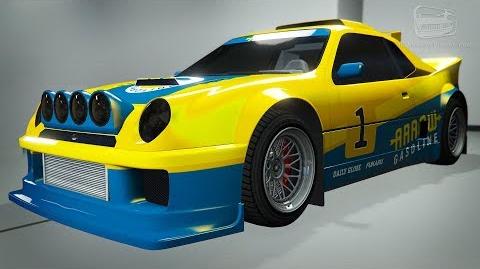