chopper_1
deathbike2 (submix)
“Whatever this is, it does not come in peace.”

The vehicle is seemingly based on the 2018 Indian Scout Bobber, but with a heavily-customized appearance.

The vehicle assumes an entirely unique appearance in comparison to the Gargoyle or its Apocalypse and Nightmare equivalents, using enclosing mudguards with glowing details in a similar manner to the Shotaro, as well as a rounded fairing with a single headlight and spiked details around it.

The main body features a similar radiator cover and various panellings around the engine bay, while the fuel tank is slightly smaller and has crystalline screen-like parts on the upper section and the sides. The seat is mounted over a structure that forms a loop bar on the rear end, while two discreet exhaust pipes are seen below the engine bay.

The rear section consist of another enclosed wheel with similar details to the front one, connected to the main body by a dual-sided swingarm and supported by two suspension springs. Below the loop bar, there is a modern tail light cluster that consist of a single diamond-shaped central light and dual arrow-shaped LED ones on the outer sides.

The primary color of the vehicle is applied on most of the vehicle's parts, while the secondary color is applied on the details of the vehicle, the front radiator cover and the rear loop bar. The glowing details seen on the mudguards, on the fairing, around the engine bay and on the handlebar grips are actually determined by the "Neon Kit" options, which is set to "Golden Shower" upon conversion. Like the Shotaro, the glowing details are more visible at night or in dark areas. When the bike moves, dark lines can be seen moving under the glowing neon color over each mudguard, creating a pulsing effect that increases in speed with the bike's acceleration.

The vehicle can be equipped with two side-mounted laser/plasma gatling guns that resemble GAU-17/A miniguns.

The Deathbike is similar to the Gargoyle in terms of handling, but has possibly the highest top speed of all land vehicles at a recorded 150 mph. The upgrades makes it an excellent choice for hits & runs. With the exception of the Future Shock Deathbike's new weapons and the lack of ability to burst its tires[2], the bike's performance remains identical to the Apocalypse Deathbike and Nightmare Deathbike. The bike appears to use a box-shaped, futuristic-like engine, coupled to a 4-speed gearbox. Its engine sound is the same as the Gargoyle and the other two Deathbike variants. However, the Future Shock Deathbike has an added "electrical" synth buzz, similar in tone to the Shotaro.

Players should be careful when the blades are equipped, since that, when taking a turn, any curbs or bumps in the way can hit the blades and may cause the rider to crash, as well as making the vehicle nearly as wide as the Chimera. Additionally, players need to be extra careful when driving this bike around Arena War events such as Carnage and Wreck It; if they fall off the bike as a result of an awkward landing or being caught in an explosion, it will count as the player being wasted.

The Deathbike is able to take a single explosive without being destroyed. However, the rider is still vulnerable to gunfire. Armor with Shield upgrades partially reduce this issue, as a rear curved shield is mounted over the rear fender, acting as a rear defense when escaping from a pursuing vehicle with front machine guns.

The Future Shock Deathbike can be modified at Los Santos Customs and other mod shops, although special upgrades are only available at the Arena Workshop.

Modified example of the Future Shock Deathbike on the Arena War website. 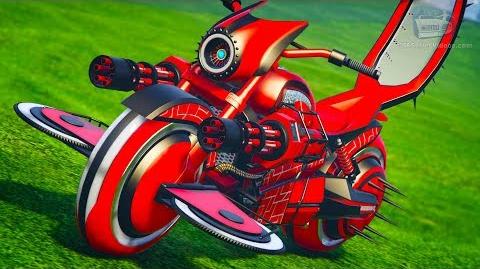