“In the way that some forty-year-old frat boys only respond to paddles and hardcore splooshing, the Futo GTX needs a firm hand to reach its optimal performance. In fact, it needs less of a driver and more of a disciplinarian. Enter at your at your own risk, and remember: this thing doesn't have a safe word.”
— Southern San Andreas Super Autos description.

The vehicle is based upon the original Futo, sharing the compact body, flared arches, flared skirts and square tail lights. However, the most noticeable features are the smaller grille, the pop-up headlights, the slanted hood area and the hatchback roofline. The interior is also retained from the original model, also having the "FUTO GT" doorcards and the vehicle's name on the tachometer.

Similar to the regular version, the primary color of the car is applied on the upper side and the stitches of the steering wheel, while the secondary one is applied on the lower side. A trim color option is also available for the doorcards and inner portions of the seats, as well as a dial color that also affects some of the custom exhaust options. It shares the same wheel design as the original model, being a derivative of the "Fujiwara" tuner rims seen in Los Santos Customs, fitted with medium-profile tires. These rims can also support a dedicated color, although only naturally-generated examples from Content Creator may have one.

The Futo GTX is powered by a 4-cylinder engine bearing four throttle bodies, similar to the original Futo. The badging still indicate that it bears a 20-valve straight engine (5 valves per cylinder) with high-performance injection, a rear wheel drive and a limited slip differential. The engine sound is high-revving and loud, more so than the one from the original Futo.

The Futo GTX has good speed and acceleration, but its strong suit is being able to drift around corners with ease. Like its original counterpart, however, it has weak resistance against hard collisions, and its wheels can bend from repeated collisions, which can greatly affect its handling. Competition-wise, it doesn't fare well in races due to its tendency in wanting to drift upon turning and is easily outclassed by vehicles with more grip, and its body roll is also noticeable when turning hard. 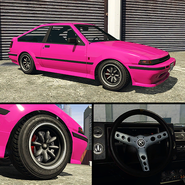 The Futo GTX in the cinematic preview on Rockstar Games Social Club.

The Futo GTX with lights on. (Rear quarter view)