“The Futo is Karin's gift to a core demographic that needs nothing more than a lightweight chassis, rear wheel drive and dangerously poor traction to have some good wholesome fun.”
— Southern San Andreas Super Autos description.

The Futo is primarily based on the 1983-1987 Toyota Corolla Levin AE86, with cues from the 1983-1985 Nissan Skyline DR30 RS Turbo for various elements, including the front, the shape and the paintjob, as well as the Nissan Pulsar N13 for the front bumper and possibly the tail lights, especially from the N13 S2 model, which were mixed with the Levin GT tail lights. The interior's dash exactly replicates real-life AE86 dash, while the steering wheel is similar to a MOMO MOD. 07 racing steering wheel. Its wheel option closely resembles the RS Watanabe F8 wheel option (likely in reference to the popular Watanabe RS wheels for the AE86 Corolla and the Skyline DR30).

The Futo is depicted as a small two-door coupé with a similar design to the 3D Universe renditions of the Manana and Blista Compact, particularly the Grand Theft Auto: San Andreas versions. The front bumper features a small extender around the bottom side, a central intake with three black horizontal separations and various rectangular vents around, as well as plastic details on the front quarters and a license plate on the center. The upper section of the car has a central grille with three black horizontal separations, which bears silver lettering displaying its name on the center, while the outer sides have a set of rectangular headlights with smaller ones just beside the grille. The hood compartment is relatively flat and bears the Karin logo on the driver side.

On the sides, the car makes use of flared wheel arches and skirting area, along with plastic details running across the sides and small amber marker lights on the front fenders. On the cabin area, the car uses plastic trim around the windows and square-shaped mirror wings mounted near the A-pillars, which are also finished in plastic. There is a wide inner separation between the door windows and the rear-quarter windows. The lower area of the doors have yellow markings that read "N/A Inline 20v RWD", subtitled with "Quad Throttle Body", "High Performance Injection", and "Limited Slip Differential".

The rear end of the car uses various square-shaped tail lights with plastic separations around them, which bear similarities to the Grand Theft Auto: Vice City and Grand Theft Auto: Vice City Stories renditions of the Police car and the Taxi. Above the tail light cluster there are badges displaying the car's name and manufacturer, along with the license plate between the tail lights, just below a black detail. The bumper is relatively simple and has a plastic detail spanning the width of the car and a moulding on the passenger side for the exhaust pipe.

The interior door panels have "FUTO" repeatedly in a pattern on the fabric, while the seat headrests have "DRIFT Sport" on them. The dashboard distinctively uses white dial markings, with the speedometer having a smaller orange scale.

The car spawns in a large variety of colors, with the primary one applied on the upper side and the secondary one on the lower side. An additional color is applied on the rims, which alternate between white (the most common color), black and gold (the rarest ones). It uses a set of eight-spoke rims wrapped in medium-profile tires. Being possibly tuned for asphalt racing and drifting, these tires are similar to those found on much higher end cars such as the Sentinel "XS" and the Super GT.

The Futo returns to Grand Theft Auto V with the same design as before, although it may spawn with a black lip spoiler on the trunk. In the enhanced version, it sports a high-quality interior based on the one seen in GTA IV, clearly denoting its influence from the Corolla Levin AE86.

The Futo was later changed in the After Hours update, where the decals on the lower sides and the emblem on the hood were removed. This was done so the decals would not conflict with the new liveries, although the liveries are only available for GTA Online. The original decal set can be found under the Classic Decals livery in mod shops.

The Futo is quite a good performer for a car of this stature, as its top speed is astonishing and acceleration is phenomenal. The chassis is rigid and taut, giving the Futo stability at high speeds. The suspension is firm but not too much, keeping the Futo flat in banked corners and stable in the S-curves, while still giving a stiff, yet enjoyable ride. Couple the excellent suspension setup with the short wheelbase and one get a fantastically chuckable little pocket rocket, capable of competing with full-on sports cars. The brakes are sensitive and effective, and front-wheel lock-up is not a big issue compared to other vehicles. Braking can be extremely dangerous in the rain. The Futo handles well off-road and can reach about 75% of its top speed on dirt roads and beaches, and grip is impressive even with rear wheel drive, while others of the same drive may fishtail easily. Crash deformation is above average, though build quality is sub-par, often leaving the Futo disabled after just a few accidents.

All in all, the Futo is great fun to drive, and makes an excellent escape or pursuit vehicle in missions. It is also an ideal car to drift since it is a light weight, front engine rear wheel drive car and is a very easy car to be put into one. The only possible disadvantages during a pursuit or escape is that the vehicle is small, lacking the power to ram or hit other vehicles out of the way, and the fact that it only has space for two occupants.

The Futo is powered by an inline-4 engine with four throttle bodies, coupled to a 5-speed manual gearbox in a rear-wheel drive configuration. The markings on the sides indicate it has a naturally-aspirated 20-valve (Inline-5) engine with high-performance injection, a rear wheel drive and limited slip differential. It uses a high-revving and rather smooth sound that is also shared with the Blista Compact and the Hakumai.

The Futo seems to be improved with higher top speed and acceleration, yet it retains most of the qualities seen in the GTA IV version. However, its improvements have not been sufficient enough to compete with most sports cars in the game, as their top speeds and accelerations have been raised further. It is utterly outclassed by supercars in terms of speed. However, the Futo is still an excellent choice to go around and as a getaway vehicle. The Futo's mass has been drastically decreased as well, giving it poor ramming power. Despite this dismal outlook for the Futo, its retained stats from GTA IV have still left it with incredible potential, and a skilled driver can make the Futo as capable as any other sports car with a higher price tag. On racetracks, it is more useful on courses with more turns than straights, as the Futo has more responsive braking compared to other sports cars, and its speed is not enough to pull itself to the lead on straights. Wet conditions, however, seem to impact the Futo heavily, as the rear end is prone to swinging outwards in such conditions. Regardless, it is still a small, potent and fun-to-drive sports car.

Again, the Futo is powered by the same 4-cylinder engine bearing four throttle bodies. The badging still indicate that it bears a 20-valve straight engine (Inline-5) with high-performance injection, a rear wheel drive and a limited slip differential. The engine sound is high-revving and rather loud, although still smoother compared to most cars of its class.

After The Diamond Casino Heist update for the enhanced version, applying each of the suspension modifications will incrementally apply small amounts of negative camber to the wheels in both GTA Online and GTA V.

Livery modifications were added for the Futo in the After Hours update for Grand Theft Auto Online, which are not available in GTA V.

The Futo as it appeared before the After Hours update (enhanced version only). (Rear quarter view)

The Futo on the updated Rockstar Games Social Club.

The Futo in the cinematic preview on GTA V Rockstar Games Social Club.

The Futo in the cinematic preview on GTA Online Rockstar Games Social Club. 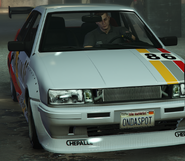 In Grand Theft Auto IV, there is a sportier variant of the Futo called Futo GT. Its name comes from the 'GT' badge on the front grill, but the game still refers to the car simply as "Futo" when entered. This version features a small body kit, a rear boot lip spoiler, a carbon-fiber hood, a roll cage, a strut bar mounted over the engine, a racing seat on the driver's side, an upgraded tachometer, and an additional 'Inline 20v' badge under the right side rear light. The car also includes a larger, blue titanium exhaust tip, an offset driver's side front license plate and finally a red tow clip, similar to those used on track cars on the passenger side of the front bumper. It always spawns in red and black with gold rims, but can be resprayed to any color. 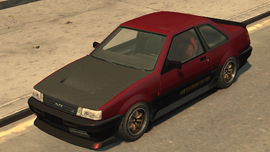 The GT variant of the Futo. (Rear quarter view).

In Grand Theft Auto Online, Futos are seen within the car meet and are also used as "gang" cars to chase the player during the Steal Vehicle Cargo - Car Meet Vehicle Cargo mission.

These vehicles also have engine and transmission modifications, which allows them to catch up with the fleeing player very quickly. 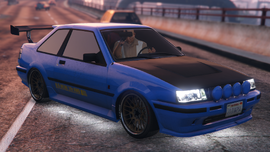