Yes
“American brand, German money and manufacturing. This is the car your grandparents fought to prevent. Cooked up after the Schyster marketing department spent a night on cocaine and bratwurst. They haven't looked back since.”
— Southern San Andreas Super Autos description

The car's overall fastback coupe design, especially the grille, roofline, and hood, are based on the North American styling of the Chrysler Crossfire. Unlike the real Crossfire, there is no convertible variant of the Fusilade, suggesting that it is based after the SRT-6 model. It also influences the German styling of the first generation BMW Z4 due to the part of the rear and the method of badging.

The Fusilade is depicted with a small body and aerodynamic profile, featuring a large rectangular intake and two smaller ones spanning the width of the front bumper. The front end features a rectangular chrome grille with three horizontal bars and a "V6" badge, along with twin circular headlights located in chrome housings. The hood features various lines above and bears the manufacturer's emblem on the front.

The sides denote its sportier design, featuring vertical vents on the front fenders with a chrome separation running towards the doors, and small "V6 3.0i" badges embossed above the separation. The skirts have a slightly concave shape and ends slightly upwards, adopting a fin-like appearance. The greenhouse area features black trim around the windows and two painted mirror shells can be seen on either side.

The rear end is distinctive by the curved portion on the trunk assimilating a ducktail spoiler, also featuring a thin brake light. The corresponding badges can be seen above the license plate and the lower corners of the trunk. The outer edges have rounded tail lights, with the middle ones being the turn signals and the reverse lights. The rear bumper slightly protrudes from the rest of the car's rear, having a moulding on the center for the twin exhaust pipes.

The car is only painted with a single color, which also affects the stitching on the interior. The rim design is shared with the Feltzer and the Sentinel, being identical to the "Organic Type D" sport wheels available in Los Santos Customs.

The car is capable of providing excellent acceleration and a decent top speed. Its light weight and good weight distribution makes it very nimble, allowing it to be able to carve into corners at high speeds with minimal oversteer. However, durability could be better, as the vehicle can withstand only a few frontal hits before its engine fails. Its front wheels are prone to getting bent and locked after hard landings and frontal crashes.

The engine model appears to be a double overhead camshaft inline-4, although the badges suggests a different one (a 3.0 liter fuel injected V6). The engine cover contradicts the model underneath, wherein the cover appears to be loosely based on that of a typical V8 engine cover, taking into consideration the valve cover bolts and spark-plug inlet impressions.

The Fusilade is one of the best vehicle choices for players who do not want to spend money on purchasing cars from the in-game Internet, but still want a well-performing car. If the player wishes to carry more than one passenger however, the Oracle, Sultan, and the Felon are other good choices in the same respects.

A Fusilade evading the police. 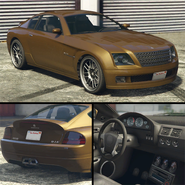 The Fusilade on the updated Rockstar Games Social Club.

The Fusilade in the cinematic preview on GTA V Rockstar Games Social Club.

The Fusilade in the cinematic preview on GTA Online Rockstar Games Social Club.