“From Los Santos to Nowhere, USA this updated classic's looks, power, heritage and exclusivity will turn heads and open legs (opening legs not guaranteed). It's as conspicuous as consumption gets, and you don't care. Actually, you probably do care or you wouldn't be thinking about buying it.”
— Legendary Motorsport description.

In Grand Theft Auto 2, the vehicle appears to be based on a classic Opel GT or a 1960s Ford GT40. The car is very wide at the front and has curved profiles. The car may have a stripe on the middle.

In Grand Theft Auto V and Grand Theft Auto Online, the Furore GT is based on the Maserati Alfieri concept, most evident in its headlights, front bumper, grille and overall body style. The front fascia layout also resembles the Maserati GranTurismo MC Corse. There is also influence from the Jaguar F-Type in the windows, the Lexus LFA in the side panels, Ferrari F12berlinetta and Toyota 86 in the rear fascia. The exhaust tips are from the Lamborghini Huracan.

The vehicle retains the general layout from its previous iteration, but assumes a more modern design. On the front, the car has a central carbon-fibre insert that is about half the car's width, while the area above is predominated by two small i takes and a large central grille, the latter being about two-thirds of the car's width and placed on a slightly higher height than the side intakes, also bearing the Lampadati logo on the centre. On the upper area, the car has black triangle-shaped housings on the outer edges, each one consisting of circular main units and vertical turn signals on the outer sides, while the bonnet has an elevated profile that is more prominent as it approaches to the base of the windscreen, along with a narrow impressed area on the centre.

On the sides, the car has distinctive formations that follow the shape of the doors and have exit vents on the front fenders, while the doors themselves have carbon-fibre mirror wings mounted near the cabin A-pillars of the vehicle. The rear fenders are more prominent than the rest of the bodywork and curves upwards from where the doors end, before becoming flat on top and slightly going down as they approach to the rear end. The cabin area is relatively simple, featuring black trimming around the windows and small rear-quarter windows, while the roof has an impressed area on the centre.

The rear of the car is defined by the curvature of the boot area that somewhat forms a lip spoiler and the inset curves on the outer sides, also featuring wide tail lamps on the upper sections and the cursive "Lampadati" badge on the centre. On the bumper area, the car bears the license plate on the centre and a carbon-fibre section at the bottom, with dual-exit, dual exhaust tubes housed on either side.

The interior of the car is shared with the Comet, featuring the same dial set and interior details from the aforementioned car. However, the horn cap bears the corresponding Lampadati logo.

The primary colour of the car is applied on the bodywork and the interior stitching, while the secondary colour is applied on the portion surrounding the central grille intake, most of the bonnet, the cabin area and a portion of the rear bumper that separates it from the upper area. The car uses a set of wheels similar to the "Sinthetic Z" sport rims seen in Los Santos Customs, but the detail in the centre is slightly larger. They also appear to apply a darker shade if a custom wheel colour is set (though it is only possible in Content Creator through the colour option). It also uses low-profile tyres, with the rear ones being wider than the front ones.

The Furore GT possesses good acceleration, good brake strength, and excellent top speed. However, its noticeable drawback is its tendency to fishtail whenever it makes a turn. The car's durability is similar as other sports cars in general.

The Furore GT is powered by a large engine which outputs a large amount of torque to the rear wheels through a 6-speed gearbox. Its acceleration is relatively average for a Sports car, falling into the middle of the pack. However, the top speed is very high, both for a Sports car and in general. Handling is lacking, while being responsive, it lacks the cornering radius and stability of other Sports cars in the corners, causing it to regularly spin out when attempting to carry too much speed. Crash deformation is meager, and will start smoking after just a few hits at reasonable speed. Brakes are acceptable but otherwise lacking. Overall, the Furore has power in a straight line, at the cost of being borderline for the class in everything else.

The engine model is shared with the Exemplar and Rapid GT, and appears to be directly based on the real-life Ferrari DOHC engines, particularly the V8 models. It features red rocker covers and has large cold-air ram intake pipes coming from the front grille. Its engine sound is almost identical to that of the Monroe; being slightly lower in pitch and volume.

A Furore GT on streets in Grand Theft Auto 2. 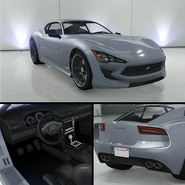 The Furore GT on Legendary Motorsport in the enhanced version.

The Furore GT on the updated Rockstar Games Social Club.