Standard White - 100%
“Who needs a super car? Who needs to throw their cash at the finest leather upholstery, godly specs and a body so seductive Aphrodite herself would have bowed down to it? Who needs an all-out-tarmac-tearing-sound-barrier-breaking-sexy-racing-dream-machine? You do. The Grotti Furia - worth selling your second kidney for.”

The Grotti Furia is a two-door supercar featured in Grand Theft Auto Online as part of the continuation of The Diamond Casino Heist update, released on December 19, 2019, during the Festive Surprise 2019 event.

The Furia was initially featured as one of the cars seen in the casino parking garage and as a mission-only vehicle that can be used as a getaway vehicle in the Casino Heist - The Big Con. However, as of the Festive Surprise 2019 event, it became available for purchase.

The Furia appears to be a mix of a variety of high-performance Ferrari sports cars, particularly the 488 Pista for the frontal shape, and the SF90 Stradale for the rest of the rear section. The side profile, front headlight strip, wheels, and tail lights resemble that of the Pininfarina Battista. The front intakes and side skirts have a strong resemblance to those from the 2017 - present Lamborghini Huracán LP 640-4 Performante. It also derives certain hints from the F8 Tributo, such as headlights. The rear diffuser seems to be taken from the Aston Martin Vantage. The car makes use of dihedral synchro-helix actuation doors, which are a common sight on Koenigsegg cars.

The car is distinctive by its rather large body and aerodynamic features around it, where the front end is largely dominated by a set of intakes on the centre and the outer sides, along with black details on the lower side and around the lower central intake. The upper area features a long light strip that spans the whole car's width and lights up when the engine is on, while the outer sides feature plastic housings containing three circular headlamps and outer vertical vents. On the bonnet area, there is the Grotti emblem on the front and an openable front trunk, with a plastic inset section near the windscreen and a vented section inside. A carbon-fibre strip can be also seen at the base of the windscreen, where the single wiper is located.

On the sides, the car features curved shapes around the rear area and is fitted with plastic skirts, along with lower intakes intended for the air to flow through the rear brakes and silver "FURIA" badges near the rear wheels. The doors slightly moves away of the car when opened and have carbon-fibre mirror shells with small fins on the inner sides, mounted over plastic supports near the A-pillars. The greenhouse area features plastic trim around the windows and a triangle-shaped rear section with a plastic detail on the end, having an openable glass pane on the centre and two intakes beside it, intended for the air to flow through the engine bay. The engine is placed between two carbon-fibre sections and bears the corresponding "FURIA" badges on the cam covers and the Grotti badge on the rearmost side of the centre. Like the T20, the Furia features a mechanical spoiler that is typically hidden and blends into the rear end of the car, which will raise on high speeds and stay active until the car comes to a stop.

The rear of the car makes use of a single red light strip spanning the whole car's width, placed over a rear exit vent that bears a silver "FURIA" badge on the centre. Both the license plate and the small reverse lamp are seen on a flat central section, while the lower area is predominated by a plastic overhang that surrounds another exit vent, with the corresponding sections for the two small red lamps and the dual-exit exhaust tips. The underside of the car is fully carbon plated, surrounded by the aforementioned plastic details on the front and sides, together with a rear diffuser that is mostly finished in plastic.

The interior of the car is the same as in the FMJ, though it uses the carbon paddle shifts from cars like the Tempesta and the Toros. A Grotti badge can be seen in the horn cap, while a rectangular window can be also seen behind the seats, which allows the occupant/s to see the engine.

The primary colour of the car is applied on the body and part of the rear diffusser, while the secondary colour is applied on the cabin area, the details of the engine and the centre of the wheels. A trim colour is also available for the interior stitching. It uses a unique set of ten-spoke angled rims with a star-shaped centre. These rims can also support a dedicated colour, although only examples generated in Content Creator or the one appearing in the parking lot of the Diamond Casino & Resort may have one. 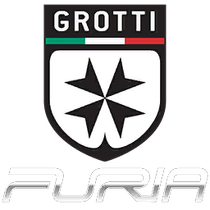 The Furia is a good all-around car. Because of the car's drivetrain configuration, it therefore has excellent traction, coupled with good, albeit understeer-happy handling at high speeds. Acceleration is good due to the Furia being an all-wheel-drive vehicle, but has a very mediocre top speed. When fully upgraded, the Furia reaches a respectable 122mph (196.3km/h), but is still slower than many cars in its class.

Despite being of a similar size and shape to most generic supercars, the Furia is surprisingly resistant; it is heavy enough to spin out most vehicles found in traffic, and its body is resistant to crashes and overturns, especially if upgraded with armour from Los Santos Customs.

The Furia is powered by a V12 engine similar to the Infernus Classic and the Toros, powering all four wheels through a 6-speed gearbox. Its engine sound appears to be a lower-pitched variation of the ones used in cars like the Cheetah. 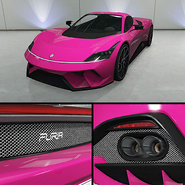 The Furia on Legendary Motorsport.

The Furia in the cinematic preview on Rockstar Games Social Club. 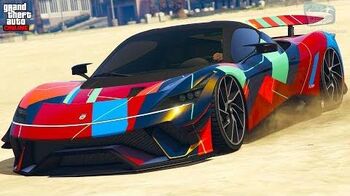 Yung Ancestor - can be found locked in the underground parking garage of The Diamond Casino & Resort with a custom licence plate reading ANCESTOR. [1] This instance flickered in and out of view but stopped doing so once the vehicle became available to purchase, and, unlike other vehicles in the parking lot, does not allow the player to even attempt to enter it (no "locked door" animation will play). 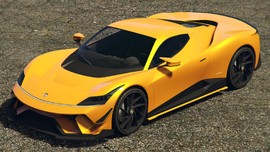