In-game time
“Hey, look here... according to this online course I've been taking, nothing says "leadership material" better than taking opportunities right? So what better opportunities we got to put the Vagos out of business, than to go shoot up the funeral of their boy Little Al that y'all killed in the drive-by?”
— Lamar Davis

Funeral Party is a mission in Grand Theft Auto Online, and is the fourth mission given by Lamar Davis to the GTA Online Protagonist in the Lowriders update.

“You need to get out of town.
Don't worry, it's not 'cause there's guys in town who want to kill you... it's cause the guys that want to kill you are out of town too.
Just meet me at Yellow Jack's in Sandy Shores and I'll explain.
And bring your people.


”
— Lamar
A new Lamar mission is available at

“Infiltrate a Vagos funeral, take out the gangsters, and take their package.”
— Level Description

The players arrive at the Yellow Jack Inn, where Lamar debriefs the players about a funeral the Vagos are holding for two of their members, Little Al and another who is unnamed, who where killed in the drive-by shootings during the mission Community Outreach. It is about to happen at Hill Valley Church in Great Chaparral. After getting changed into funeral clothes, the players head to a Los Santos Customs in Harmony where the players kill several Vagos members about to head to the funeral, and steal their Emperor. After taking their vehicle, the players then join the end of a Vagos convoy inbound for the funeral. On the way to the church, Lamar explains that the reason why they are attacking the Vagos there is because they are using the Hearses as a front to smuggle Crack cocaine in the coffins. After tailing them to the church, the players must walk unarmed with the several gang members to the graveyard where the funeral service takes place, where it is further revealed that the drugs were acquired from the deceased, whom had kept them hidden in trash bags in their attics. After the cutscene, the players blow their cover by engaging the Vagos in a shootout with pistols only for "respect" as Lamar says. After clearing out the area, the players must go back to the church parking lot, fend off newly arrived Vagos, steal two Romero Hearses and deliver them to a drop off point in Sandy Shores while evading the pursuing Vagos and several roadblocks.

Lamar informing the players on his plan to ambush the funeral.

Ambushing the Vagos at the petrol station.

Falling into the funeral procession.

The procession headed for the church.

Arriving at the church.

Walking to the graveyard.

A Vagos member giving a eulogy.

Leaving the vicinity in the Hearses.

Evading members of the Vagos.

Arriving at The Boat House. 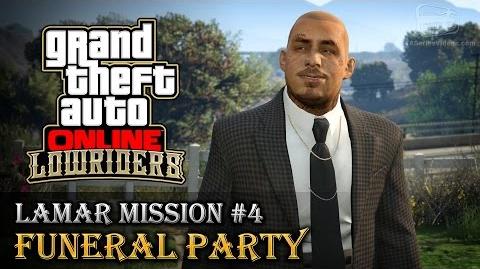