"The Fugitive is the go-to cruiser for law enforcement and those that want to pretend they are law enforcement. The gas mileage isn't so great, but cops mostly sit with the car idling anyway."
―Southern San Andreas Super Autos description.

This car appears to be based on the 3rd generation Holden Caprice and/or the Holden VE Commodore.

At the base of the front bumper sporting influence is very prevalent. The front bumper features a main central vent whose base appears to have a CFRP insert. Either side of this vent there are two, less tall vents, whose inner edges are parallel to the outer edges of the central vent. Above the central vent there is a large main grille with chrome edges and a horizontal chrome strip splitting it into two halves, much like that on the eighth generation Chevrolet Malibu. The headlamp units have curved lower edges which almost continue the curvature of the bottom edge of the grille. The bonnet/hood has a main elevated area, whose edges run from a top corner of the main grille to their corresponding windscreen corner. The car features rear view mirrors whose outer shells are finished in CFRP.

The Fugitive is one of the fastest four-door sedans in the game, bearing what is modeled as a twin-cam 4 cylinder engine, the car is powered to high speeds in above average times. The top speed is also very high for its class, and due to its above average handling, it is able to keep at a high speed when controlled professionally, enabling the vehicle to perform tight maneuvers around traffic. On the downside, due to its high power combined with its sharp handling, some oversteer is still present, however, when controlled by a skilled driver, this may not pose a problem. Braking is also acceptable for a vehicle of its class, although it can be considered beaten by other vehicles in Sedans, and many in the Sports class.

Overall, the Fugitive is average for its class, sharing average handling and acceleration, though an impressive top speed, similar to what is produced other performance cars in the game. 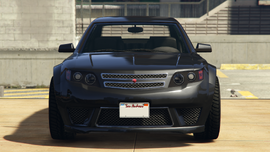 The Fugitive on the Rockstar Games Social Club. 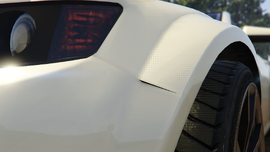 Poor alignment with the bumper. 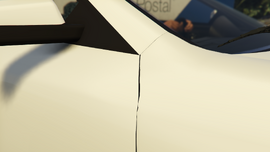 Poor alignment with the passenger-side door.

Retrieved from "https://gta.fandom.com/wiki/Fugitive?oldid=1141227"
Community content is available under CC-BY-SA unless otherwise noted.