In-game time
“You may or may not know, but TP Conglomerate owns the gas station out by Ace Liquor. It don't get used much, but if there's an opportunity to fill the pumps on the cheap we take it. The Lost have a tanker of fuel at a depot near Harmony, Trevor wants you to steal it and bring it here. R. Jakowski.”
— Description

Fuelling the Flames is a mission in Grand Theft Auto Online given to the player by Ron Jakowski. It is available for up to 4 players.

The Trevor Philips Enterprises owns a gas station which isn't used so much. Ron knows that the The Lost MC have a tanker full of fuel in a depot near Harmony that Trevor Philips is interested in. The team heads there and has to eliminate the bikers to get the tank. When the tanker is stolen, more bikers will come after the player and start shooting at the tanker and the player. Killing them or just eliminating them, the tanker needs to be delivered to the gas station in Sandy Shores. 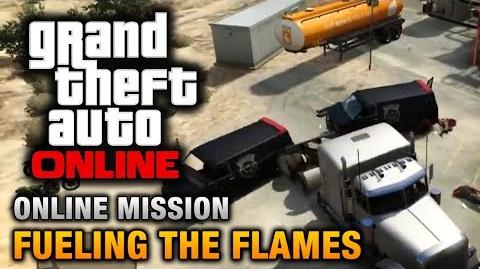