GTA Wiki
Register
Don't have an account?
Sign In
Advertisement
in: Cleanup, Businesses, Businesses in GTA IV,
and 6 more
English

Fruit Computers is a corporation that designs, develops, and sells consumer electronics, computer software and personal computers in the HD Universe. The player can buy stocks from them in the Bawsaq.com website in GTA V.

It was founded in 1975; one year before the company which it parodies, Apple Inc., actually became an independent company. Its best-known hardware products are the iFruit phone and the Fruit line of computers. Its software includes the FruitOS and an unnamed graphical user interface. In 2008, the key people are Mr. E. Mann and Doug Hatchet.

The CEO, Doug Hatchet, has outsourced all of Fruit Computers employees overseas, except himself. Doug now is the sole occupant of the Fruit Computers Headquarters. All the company has left in it is a broken copier and an empty stapler. There is a Fruit Computers warehouse in Port Tudor, Alderney, however, the building seems to be abandoned. Fruit Computers can also be seen advertised in various computer shops throughout the game. On WTF billboards and advertisements it can be observed that Fruit Computers is one of the musical's sponsors.

The player gets a Fruit laptop in every safehouse (pink in the DS version, black in the PSP version). The player is not able to access the internet, but it features e-mail and Rockstar Games Social Club compatibility. Also, many characters, including Wu Lee have fruitcomputers.com email accounts.

The company maintains its popularity during the events of Grand Theft Auto V, with the launch of the second generation iFruit. Fruit all-in-one desktops, which resemble iMacs, are shown in gameplay. Fruit laptops which are copies of the MacBook Air can also be seen. Later in the game, after the mission, Vinewood Souvenirs - Tyler, a Liberty tree internet article says that the company has just announced iFruit Shoes, wearable technology that navigates people to discount stores and tells which places they should avoid. This is probably based on Google's talking shoe concept. The article also mentions iFruit underwear, a wearable device that vibrates when the user is near a bathroom or is interested in fast and anonymous sex.

During the mission The Vice Assassination, Franklin is hired by Lester to assassinate Facade's CEO, Jackson Skinner, while he is picking up a prostitute. His murder makes iFruit stocks on the BAWSAQ skyrocket.

In December 12th, 2019, iFruit Radio began broadcasting in Los Santos. The station is owned by Fruit Computers and is hosted by Danny Brown.

Before completing The Vice Assassination, invest all the money of all the three protagonists in iFruit stocks, complete the mission and wait 6-8 hours in-game until the stocks reach their maximum percentage of return, in this case, is about 50%.

The logo bears a resemblance to male genitals, due to Rockstar's adult humor. The logo's former color scheme also copies the Microsoft Windows logo's color scheme (with the exception of red being changed to orange). After 2009, the color scheme was replaced with silver. Alternate logos also include "Fruit" written to the right of the original logos.

Advertisements can also be seen in Star Junction. 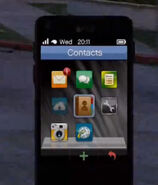 An NPC wearing an iPod-like mp3 player in GTA Online.

Desktop Fruit computer as seen in the Player's office on the secretary's desk.

This article or section needs to be cleaned up to meet the standards of the GTA Wiki.
Integrate and purge