This mission crosses over with Diamonds in the Rough.

Frosting on the Cake

• ­Use the sticky bombs to take out the bikers.

• ­Drive Tony back to the club.

"Those Diamonds are gone too, Lou. We're really in the shit now."
— Gay Tony

Frosting on the Cake is a mission in The Ballad of Gay Tony, given to Luis Lopez by Tony and is played through Johnny's point of view in Diamonds in the Rough.

The mission starts showing Gracie, Sharon, Evan and Rocco having a coke hit at Tony's apartment. Luis walks in looking for Tony, who called him in earlier. After having an exchange with Rocco, Luis finds Tony passed out on the floor. After waking him up with a brisk dunk in the bathroom sink, Tony tells Luis that they're going to purchase some 2 million dollars worth of diamonds off a smuggler in Broker. As they leave, Evan decides he wants to go as well.

Complete the mission in 5:45
Have less than 50% damage.
Amount of accuracy with the sticky bombs.
Lose the wanted level in 0:35

Drive the Stretch E with Evan to the docks where the Platypus is in Broker, where The Cook is waiting. Listen to Evan whine, but try not to damage the limo too much. Once you arrive, a cutscene will start showing the deal going down. At first everything is fine, but soon Johnny Klebitz and the Broker Chapter of the Lost biker gang show up to crash the deal. Luis and Tony will dive into one limo, and Evan with the diamonds jump into another. Now, instead of driving, you'll be riding shotgun, with the camera facing behind the car and given Sticky Bombs in order to hold off of the chasing bikers and vans. Try to aim for their front tires, and destroy the roadblocks as soon as you get to them. Once you're near the Algonquin Bridge an APC will show up, along with a NOOSE Annihilator. Throw as many Sticky Bombs as you can until the APC explodes, and 2 or 3 to drop the chopper. At the end of the bridge, your driver is shot and you must lose the heat, regaining control of the limo. Lose the heat, and go to Hercules to end the mission. The mission ends when Tony tells you that Evan was killed, apparently while bleeting online about his impending doom at the hands of Johnny Klebitz, and the diamonds are lost.

"Evan Moss, 24, was found murdered in Broker. When, at the age of sixteen, he won the Teen Iron Weightlifting Competition in Arizona, no one could have precicted this violent end. Tragically, his life took a turn for the worse. After positive drug tests, the loss of his weight supplement sponsorship deal, and alleged involvement in a male escort business he hit rock bottom."

"Moss had recently gained public attention as a star of the Liberty City nightclub scene. He was often sited with minor celebrities too drunk to know better at Algonquin hotspot Maisonette 9. It was even rumored that Moss had hooked the biggest whale in the Liberty City Scene - nightclub baron Tony Prince. Mr. Prince would not comment on his friend's untimely death. The LCPD are looking for a group of men wearing tight black leather in connection to the slaying."

"Just when the homosexual community had gained a smatter of respectability by parodying themselves in reality TV shows and sitcoms, they go and ruin it for themselves. The death of Evan Moss, amateur body builder, drug addict and cum receptacle for "Gay" Tony Prince, got himself killed in the most brutal of fashions. This just goes to show that a deviant lifestyle will lead to an unfashionably early arrival at the sodomites' party in Hell. Deputy Mayor, Bryce Dawkins, weighed in on the issue "If America is to remain the moral Christian country I know it is, we need to take the vote away from these people. They can concentrate on picking out wallpaper and leave the choosing of our President to real men."" 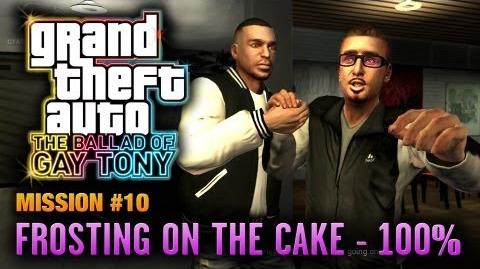 A cop about to kill Costas.

Death of Costas.
Add a photo to this gallery

Retrieved from "https://gta.fandom.com/wiki/Frosting_on_the_Cake?oldid=1326808"
Community content is available under CC-BY-SA unless otherwise noted.