From Zero To Hero

Vic: "Look Lance...I am a long way from being a good guy, but drugs just mean trouble."
Lance: "I agree, man, I 100% agree. That's why we're gonna get this one big pay day for all the hard work and split! Jerry Martinez...It's his coke."
Vic: "Oh...Fuck it. You know what? Let's do it."
— Lance Vance tells Victor about the big score they can take from his old enemy, Jerry Martinez

From Zero to Hero is a mission in Grand Theft Auto: Vice City Stories given to protagonist Victor Vance by his brother Lance Vance from Lance's hotel room in Downtown, Vice City.

Lance informs Vic of a cocaine shipment arriving in Vice City and he intends to steal it. Vic is initially not interested until Lance reveals it belongs to Vic's bitter enemy Jerry Martinez. Victor and Lance leave the hotel room and drive to the docks in Little Haiti in Lance's Sentinel XS. They are met by some of Martinez's men, who they kill, and then steal the two Barracks OLs containing the cocaine. Lance and Victor drive off, managing to avoid more of Martinez's men in Bobcats and Sentinel XS'.

They reach the bridge connecting to Washington Beach, where Martinez begins to fire missiles towards the two from a Hunter. Victor and Lance manage to get to the other side of the bridge where the VCPD are waiting, which scares off Martinez. Victor and Lance then drive to their new safehouse, driving the two trucks into the garage.

Louise Cassidy-Williams: Lance tells me you're gonna be rich... Does that mean you don't have
time for me no more?

The reward for completing the mission is $3,000 and the mission Brawn of the Dead is unlocked. The bridges connecting the mainland with eastern Vice City have also reopened, allowing the player to access Ocean Beach, Washington Beach and Vice Point. Pilotable aircraft and boats (along with their respective side-missions) can now be controlled, and the player can now attain a six-star wanted level. 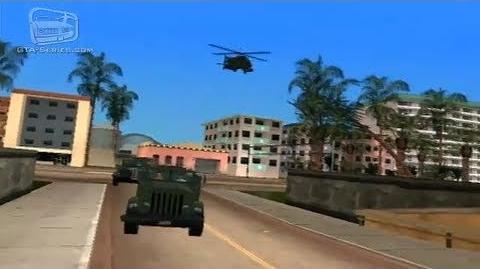