S_M_M_Gentransport (Pilot)
“Stylish, roomy, easy to handle with a cruise speed of 130 knots, this 4-seat single-engine light helicopter is popular with both private pilots and charter companies. Featuring an enclosed tail fan, the Frogger is one of the quietest helicopters on the market today. Especially great for the man who needs to get to work fast but can't bear the moaning of neighbors complaining about noise and rotor wash.”
— Elitás Travel description.

The design of the Frogger is based on the Eurocopter EC130, sharing its single-engine design and low tailboom. The passenger section is derived from the larger Eurocopter EC135, with the most notable difference being the cockpit doors with enlarged windows. The skids are similar to the ones from the Eurocopter AS350 Écureuil

The aircraft is depicted with a more modern and contemporary design compared to the Maverick, whose front end is mostly rounded and features large windows, access door and a nose-mounted searchlight/camera. The middle section of the aircraft features sliding doors that are always open, and modern skids below that are also used on the Maverick and Police Maverick, while the upper area features a tall engine compartment with twin exhausts on the rear and a four-bladed rotor on top, together with a winch on the left-hand side. The tail boom and empennage are relatively simple in design and feature horizontal stabilizers with vertical fins, a Fenestron tail with six rotor blades, and a tall vertical stabilizer. The aircraft is usually seen with grey stripes passing through the fuselage and tail boom.

The interior of the aircraft is relatively large, featuring a small instrument panel and a rear bay with additional seats. In the enhanced version, it uses the same "Flyer" dials as the Maverick and Police Maverick, and shares the same arrangement with the aforementioned aircraft.

The aircraft is commonly seen in a black primary color for the entirety of the fuselage and tail boom, although other colors are also available, such as red, blue or white.

The Frogger is a very well performing helicopter. Its handling is above average thanks to its light weight and four-blade rotor system. The Frogger is single engined and has enough power to jet the helicopter forward with minimal resistance. Durability is also acceptable considering the design of the helicopter and its structure. The ability of turning, stopping, and inclining is very responsive. The distance of the skids also means it is quite stable to land on most surfaces, provided the player lands carefully to avoid sliding away from the intended landing zone.

However, the Frogger is not very usable for making "Fly-Bys" and evacuation scenarios because of the mostly open and light structure of the helicopter, which gives almost no defense against enemy firearms. It often takes only a few shots to the engine for it to suffer from the damage shortly after shortly after. If the rotor has been stopped about 3–4 times, the system will give a warning sound, and the rotor-engine will completely shut down, leaving the helicopter unusable and slowly floating to the ground.

Overall, the Frogger is a wise choice for transportation and basic tasks, similar to the Maverick.

Upon being converted into a personal aircraft, the Frogger can only be repainted with a primary color. The stripes cannot be removed, however.

Official screenshot of the Frogger, confirming its appearance.

Another image of the same helicopter.

Flying towards the city.

Flying near the FIB & IAA Headquarters. 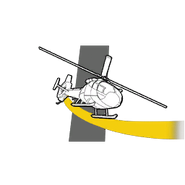 Preview of the "Helicopter Course" Flight School lesson, showing a Frogger with a strike guard and different skids. 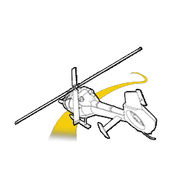 Preview of the "Helicopter Course" Flight School lesson, also depicting a Frogger with the aforementioned details. 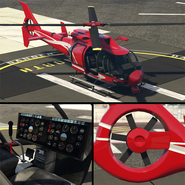 The Frogger on Elitás Travel.

The Frogger on the updated Rockstar Games Social Club.

The Frogger in the cinematic preview on GTA V Rockstar Games Social Club.

The Frogger in the cinematic preview on GTA Online Rockstar Games Social Club.

Trevor Philips owns a black Frogger after the mission Three's Company, which features crudely painted red Trevor Philips Enterprises logos scrawled on the tail, along with various obscene writting typical of Trevor's behaviour (reading "Fuck da Feds" or "Pants down dick out"). Dialogue from the mission Predator reveals that the helicopter was stolen from the FIB by Trevor following said mission as a "payment". This is also evidenced by the "FIB" decals behind the red paint.

A variant of the Frogger with black paint job and FIB decals exists, which was initially unused and is essentially the TPE variant with no red paint. It is possible that this variant was meant to be used in the mission Three's Company in place of a maroon civilian Frogger (as suggested by the mission Predator), but was discarded for unknown reasons (possibly because it would be less plausible for the FIB to attack a fellow government branch openly). It was later introduced in Grand Theft Auto Online as part of The Contract update, during the mission Setup: Data Recovery.

The FIB Frogger seen in Grand Theft Auto Online during The Contract update.

A white version with a Police Maverick spotlight appears in the mission The Bureau Raid, after the first rappel event. It appears alongside the Buzzard Attack Chopper, shifting positions but not engaging players after the Buzzard Attack Chopper is destroyed. Depending on if the mission has been completed previously, the pilot may be civilian or FIB. Acquiring the helicopter requires cheat codes to jump down/skip the second rappel event, then damaging it until it is forced to land. The police spotlight is still active upon the player entering it. If the Buzzard Attack Chopper is destroyed prior, the Frogger will shift over from the highway and over the uneven park grounds. It will crash when forced to land on the uneven terrain. Like the spotlight on Police Mavericks, it can be shot out. Unfortunately the helicopter cannot be repaired with the "character switch repair", currently the helicopter will disappear upon switching back to the character who's occupying it.

The white Frogger from The Bureau Raid.

A Frogger painted dew yellow which appears to be affiliated with the Lifeguards can be seen flying in a pattern over the coast of Vespucci Beach sometimes as far as Chumash. It never lands, making the helicopter tricky to obtain.

To get it, the player needs to damage it with a Buzzard Attack Chopper until its engine breaks (once the engine starts shutting off a couple times for a few seconds, leave it, as the engine will eventually completely break); it will slowly start to descend, when it is low, quickly determine where it is going to land, and get down to the ground before it does. As soon as it hits the ground, quickly enter it, the player will not be able to enter it if the pilot and passenger hop out. Once obtained, quickly switch characters to perform the character switch vehicle repair trick. However, if the helicopter has officially shut down completely before the repair is performed, the helicopter will vanish.