Friendships in GTA IV are a type of game mechanic in Grand Theft Auto IV. The player befriends several acquaintances over the course of the game's storyline, primarily after performing an adequate number of missions for these contacts.

The player's friendship with a character is determined by a "[Character name] like" attribute found in game stats; the higher a friend's "like", the better their relationship with the player. Hanging out with friends is the primary method to improve on the player's relationships with their friends, eventually allowing the player to unlock special benefits; the player can also increase his friendships (as well as their "respect") through certain storyline missions. However, rejecting offers by friends to go out or ignoring friends for too long will eventually result in a friend's "like" towards the player dropping; players will be notified of the latter via a text message.

Except Roman, a friend may be sleeping and will tell Niko to call back at the time they request when he calls them at a late time. If Niko performs this, the friendship of that friend may drop.

After setting an appointment, the player will have to head to their waiting friend, which will spawn in one of several possible points of the city.

The player can use nearly any mode of transport during an outing. In addition to regular road vehicles, the player can also take a Taxi or ride the subway. If the player chooses to pick a friend up using a motorbike or a helicopter, the friend will utter unique comments on the player's choice of vehicle.

After picking up a friend for an outing, they will usually engage the player in a conversation about their personal life.

After picking up their friend, the player's is primarily instructed to head to the activity as agreed upon during the phone call, but can in fact make several stopovers on the way for other activities to boost the increase of the friend's "like" upon completion of the outing. Once the player complete the primary activity, the friend will ask the player to drop them off a specific location, at which point the friend's "like" will increase.

Activities will cost money, with some (such as going to eat with Roman) being particularly expensive for players early in the game. The gap between the completion of the mission and the point which a friendship is established may last several days. Also three of five friends are required for 100% completion.

There is a total of five available friends in GTA IV, two of which may be killed over the course of GTA IV's storyline:

There are a total of ten activities that can be performed in an outing. Only certain activities are available to each friend, and even then so friend may express preferences towards a certain type of establishment to go to.

This can be done at any Burger Shot, Cluckin' Bell and Pizza This branch throughout Liberty City, and also other diners, cafes and restaurants that become available while you're out with a friend.

Drinking at the bars in Hove Beach (Broker), Steinway (Dukes), Purgatory (Algonquin), or Hatton Gardens (Algonquin). Being seen driving drunk will attract Wanted stars; it's best to take a taxi.

Go bowling in the alleys at Purgatory (Algonquin) or Firefly Island (Broker).

Play pool in Schottler (Broker) or at Playboy X's loft (if available; see spoilers below).

Throw some darts at the Irish/German Pub in Steinway (Dukes) or in Purgatory (Algonquin).

Visit a strip club. There are The Triangle Club in Northern Gardens (Bohan), and Honkers Gentlemen's Club in Tudor (Alderney). Lapdances are available in strip clubs.
It is not necessary to have a lapdance. So, the player may do this activity without losing money.
It is not necessary to leave with your friend either. You can leave him behind in the club and their like status will still raise either way. They will also send the player a positive text message once the player abandons them.

Visit the Cabaret Club in Hove Beach (Broker) or the Comedy Club, Split Sides, in Star Junction (Algonquin) to catch a show.

You can go with Brucie Kibbutz and two of his lady friends on helicopter and boat trips throughout Liberty City.

Occasionally you will be called to give someone a lift; this usually happens when a friend is injured.

Like girlfriends in GTA San Andreas, friends provide special benefits if their "like" percentage reaches 75% (they will call you to offer their particular ability). You can lose these benefits if their "like" percentage fall below 75%; when you raise the level again, you will get a text message. This will also have effect on the voicemail your friend leaves when he/she is absent.

Note: Sometimes a friend's benefit will not be available, due to excessive use or being blocked during certain missions.

Roman will send you one of his cabs to pick you up and take you to destinations around the city.

He will arrive at a location near you and sell you guns and equipment at discounted prices.

He will pick you up in a helicopter and take you to destinations around the city. 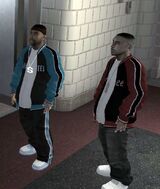 He will send a couple of his goons to help you out.

He will place a phone bomb nearby. Collect the phone bomb and plant it on a car.

The friendship feature is derided by certain commentators as a tedious and annoying aspect of GTA IV, as friends will consistently call the player on offers to go on outings, and there is no clear way of avoiding the activity without sacrificing their player's friendships. (Thereby making it difficult to leisurely explore the city or seek out Flying Rats and side missions.) Even if the player chooses not to go on any outings, friends will still call the player regardless, even if the player sets their phone into silent mode (which is intended to block incoming calls). However, there is a simple method of avoiding going on outings without penalty; this is achieved by initially accepting a friend's offer to go out, and selecting the "Cancel Plans" option after the call.

The friendship feature was downgraded in importance following GTA IV. The feature was brought over to The Lost and Damned (see Friendships in The Lost and Damned), but is no longer mandatory to the player to do. In The Ballad of Gay Tony (see Friendships in The Ballad of Gay Tony), the friendship feature is the same as in TLAD; it is not mandatory to do as there is only two friends available for the player.

The friendship system was heavily criticized by GTA fans, because of the friends may constantly call Niko and ask them to hang out, and it is hard to explore Liberty City without any interruptions. Because of this, the feature was significantly tonned down in Grand Theft Auto V. However, the amount of friends was balanced (you can now hang out with another protagonist), and they will never call you, you can only call them, and there is no penalty for not calling them.

Retrieved from "https://gta.fandom.com/wiki/Friendships_in_GTA_IV?oldid=917492"
Community content is available under CC-BY-SA unless otherwise noted.