In-game time
“Have you seen the prototype in the demo room? When Norris unveils it at the keynote, minds are gonna blow!”
— Rickie Lukens discussing the Lifeinvader mobile device with Michael

Friend Request is the first mission in Grand Theft Auto V given to protagonist Michael De Santa by Lester Crest.

With Michael now owing $2,500,000 to Martin Madrazo for his mistress' house, he visits the home of an old friend named Lester Crest. After being let in, the two briefly catch up before Lester receives an alert about Lifeinvader founder Jay Norris. He throws Michael a backpack containing an explosive device, and asks him to buy some "youthful" clothing at the SubUrban on Power Street; if Michael approaches the store without any money, Lester will give the player $200 to buy the outfit. After this, Lester gives him instructions to infiltrate the Lifeinvader Office and plant the device in their latest prototype phone.

Once at the Lifeinvader offices, Michael waits at the back entrance as a programmer walks outside for his cigarette break and lets him in. He mistakes Michael for a tech support agent and asks Michael to remove a number of pornography pop-ups from his computer and install some anti-virus software. After this is done, he mentions that the prototype is in the demo room; Michael finds it, plants the explosive inside it, and leaves.

Michael lets Lester know that he's rigged the phone and heading home to watch Norris reveal the prototype at a keynote on TV, and they debate Michael's favorite entertainment, classic Vinewood movies. When he gets home, he kicks Tracey - who was watching Fame or Shame - out of the living room, and switches over to Weazel News to watch the event broadcast live. Waiting until Norris reveals the phone, Michael dials the number. Once Norris answers, confused at the unexpected call, the phone explodes and kills him instantly to the crowd's shock and horror. An official waves to the camera crew to stop broadcasting and the signal feed goes dead. Michael is taken by surprise at the force of the detonation.

Michael calls Lester, who says the incident has generated a huge profit for him on the stock market, and agrees to help Michael. He also sends a text with a link to the in-game stock market for Michael to later browse at his leisure.

"Viewers were horrified yesterday to witness the worst act of corporate espionage in American history. Jay Norris, the controversial, outspoken champion of openness and data mining had his data mined all over the stage when his head was blown off while giving a keynote speech at a shareholder meeting at the Vinewood Bowl, in Vinewood Los Santos. Mr. Norris, CEO and founder of social networking site Lifeinvader had made many enemies in his rise to the top, but nobody thought he was a likely assassination target. He had recently been championing the rights of companies to share and use data as they saw fit more freely. He had also helped block proposed legislation to regulate the use of sourced labor, arguing that is "un-American of us to tell foreigners how many hours a mature 12 years old should work, or what their minimum wage should be. In some countries you can live very well on 35 cents a day." He was demonstrating the company's much hyped Lifeinvader "docking" smart phone when his head was blown off, killing him instantly."

(after The Long Stretch mission)

"Jay Norris has head blown off on TV. Jay Norris, Lifeinvader CEO and controversial champion of openness and data mining, had his data mined all over the stage, when his head was blown off while giving a keynote speech to shareholders at the Vinewood Bowl. Mr. Norris was demonstrating the new Lifeinvader telephone, when a bomb was triggered, killing him instantly. Police are unsure of the motives. Lifeinvader's shares are down on the news."

Michael talking to the cashier in SubUrban.

Michael going to the rear entrance.

Michael deleting the viruses from the programmer's computer. 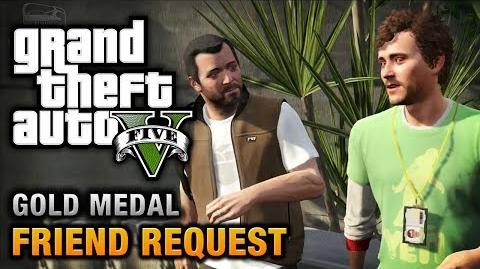 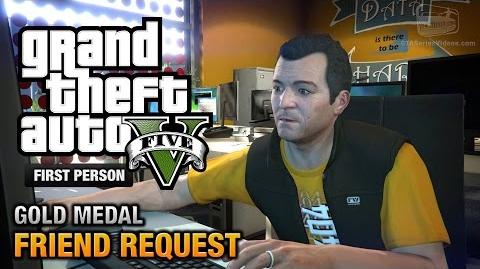 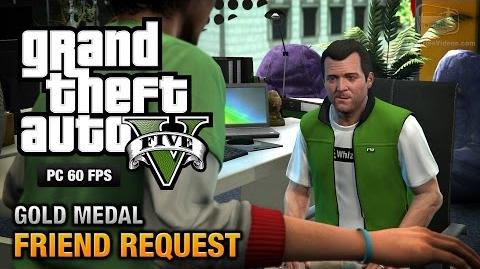 This article or section needs to be cleaned up to meet the standards of the GTA Wiki.
integrate and purge