The Freight is based on an EMD SD40-2, given the overall shape and layout. Unlike real EMD SD40-2 units, where the doors are located on the front and rear of the cab, the player enters the vehicle using one of the two doors located on the sides, much like with a two-door car or truck.

The Freight features a long chassis with triple-axle bogies, brake cylinders on either side and large defenses with couplers mounted on both ends, as well as access steps on either side. Tall guard rails can be seen around the perimeter of the whole locomotive, with open sections on both ends and where the access steps are located. A set of circular lights can be also seen on the front and rear guard rails.

On the front section, the nose features a white/black warning pattern and houses four circular lights near the upper corners, while the main cab features rectangular windows and access doors on the sides of the cab. The section above the center of the cab mounts red stacked lights, while the sections beside it mount two signs that read the running number "309". On the rear section, the locomotive features various compartments and large vented sections on either side, while the top features three large cooling fans and small frames on the rearmost section. The rear end also features a white/black warning pattern and stacked circular lights on the upper area, as well as access steps on the left half.

The train is only available in a gray/brownish color around the body, where the primary one is applied to most of the locomotive's body and the secondary one to the upper portions, where the central windows of the cab and the engine side vents are located. Although unmarked, it is implied that the Freight is operated by Brown Streak Railroad.

The player can either ride in one of the train's flatcars, or steal the train by entering the locomotive up front, assuming control of the train themselves. When driving the Freight, the player has the option of engaging in the Freight Train Challenge side missions (only after unlocking the entire state).

Both the Brown Streak and the Freight have some realistic effects, particularly the ability to derail at high speeds.

The train begins to shake above 190km/h (118 mph), at which speed it will derail upon turning. Also, if the train is pulling more flatbeds, its acceleration will decrease due to the added weight, and the length to entirely stop the train is will also increase. The Freight is immune to all forms of damage, including weapon damage, fire, and any physical obstruction; however, derailments will render it useless. There are no first/third person views when driving or traveling in the train, and the cinematic view is the only view available. 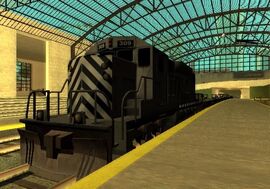 The Freight in San Fierro. 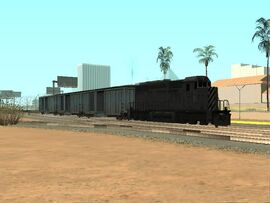 A Freight parked at the Sobell Railyards, Las Venturas, with three boxcars attached.

Although not making much appearance during the storyline, it has a prominent use in missions.