GTA IV
For the street race with the same name see, Freeway (race).
“The signature bike of Mitch Baker and his crew. Approach with extreme caution.”
— GTA Vice City Website

The Freeway resembles a classic Harley-Davidson panhead motorcycle in all its appearances, as is the basis for the Angel. It has a long wheelbase, rather heavy weight and fatter tires than other bikes.

The Freeway had minor detail changes through the games, where the following differences can be seen:

The Freeway resembles a 2007 Harley-Davidson Fatboy, and sports a Western Motorcycle Company brand and conventional handlebars, distinguishing it from more radically designed choppers. The bike is also available with one or two-tone colors, different carburetor caps and gas tanks, and optional side panniers (saddlebags) at the rear. 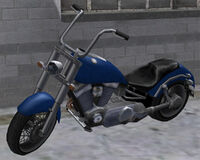 The Freeway is the second and third fastest bike in GTA Vice City and GTA San Andreas, respectively. Due to its heavy weight, it is not suitable for stunts or off-roading, but its speed makes it an enjoyable bike for ordinary street-cruising. Its handling and acceleration are below average. It has a very wide turning circle, which can give trouble when parking, or running from the cops. And its acceleration is marginal, but not impressive.

All in all, this is the best cruiser of all the bikes, but should never be put in a position when high speed and tight handling are needed.

Screenshot of a Freeway in GTA Vice City. 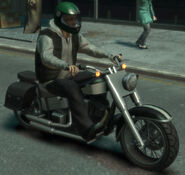 Grand Theft Auto IV, with optional side panniers (saddlebags) at the back.

The requested Freeway in Stevie's Car Thefts in GTA IV.