The Freemode Events Update is a content update for Grand Theft Auto Online and Grand Theft Auto V, exclusive to the Xbox One, PlayStation 4 and PC versions of the game. It was released on September 15, 2015.

The update allows players to experience "a completely new way of playing GTA Online", with various new modes, activities and features available in Freemode. These events can be triggered and completed without having to join a lobby, making them unique from Jobs. Two new Adversary Modes, Hunting Pack and Cross the Line, have been added as well. Also, as of this update, the Rockstar Editor is available for both Grand Theft Auto V and Grand Theft Auto Online on Xbox One and PS4.

To make room for the new freemode events, various existing freemode events have been discontinued in the enhanced versions, but they remained available to players on PlayStation 3 and Xbox 360 until access to GTA Online was removed for these consoles in December 2021.

I Married My Dad clothing 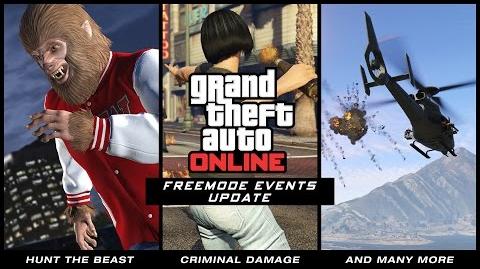