All players in session

Freemode Events are a feature in Grand Theft Auto Online. They were introduced in the Freemode Events Update, exclusively for the Xbox One, PlayStation 4 and PC.

Freemode Events will occur in most Grand Theft Auto Online sessions including Public, Invite only, Crew and Friends sessions. A random event will be choose as long as the requirement is met for that session. The requirement to trigger an event is that there are at least 3 unaffiliated (that is not members of the same Organization or Motorcycle Club) players in the session who are outside. However, some events will only be available if there are at least 10 players in the session. The Freemode Event or Challenge that is currently in progress will be cancelled if players leave the lobby and there are less than 2 unaffiliated players left.

These events alternate with Business Battles and will trigger 20 minutes after the first eligible player joined the session. All players in the current session will be notified with a on-screen HUD message that an event will begin soon, and a timer in the bottom right corner may count down until the start of the event. In some instances, a "Prepare for [challenge]" message will appear, for Challenges only. If a player is in passive mode, they will be warned about this preventing them from participating in the event or challenge.

Once the event begins, all players in the session will be notified, regardless if they became part of the event or not.

At the conclusion of the activity, a 20 minute cool-down will occur before the next battle or activity is triggered.

Every so often, challenges become available for players to compete in. They are much simpler and last less time than standard Events. Challenges vary, and are randomized from different categories, such as combat, vehicles and general gameplay.

Business Battles - Added as of GTA Online: After Hours, alternate in public Freemode sessions, players go into head to head battles over large drops of Business goods. Owners of Nightclubs can deliver them to their underground warehouse, or simply drop them off in a location designated in the map for a cash and RP reward.

Time Trials are another kind of Freemode Event, which are set out as permanently available in-session races. In public lobbies, Time Trials are found marked on the map with a purple timer icon. There are 22 different Time Trials which change weekly as part of Weekly Events. The Time Trial is a point-to-point race with no checkpoints, and the objective is to beat a time set by Rockstar Games themselves.

As of the GTA Online: After Hours update, the following Freemode Events are no longer triggered:

Icons for all Freemode Events in Grand Theft Auto Online. 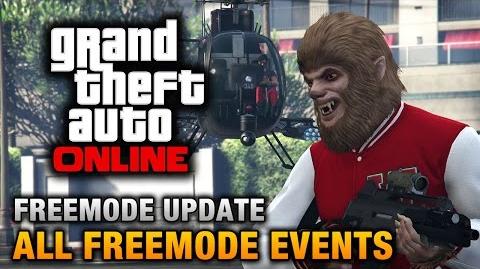