All players in session

"Compete in 19 unique Challenges against your Freemode friends and foes. See who can perform the longest jump, who can drive the farthest without crashing, who can fall the longest distance without dying, who can freefall the farthest before pulling their ‘chute – and many other ways to risk your neck to try and be a top 3 finisher for GTA$ and RP rewards."
―Description

Freemode Challenges are a series of challenges available in Grand Theft Auto Online as part of the Freemode Events Update. As implied, they are available to play in Freemode lobbies with at least 5 players. With the release of the Los Santos Summer Special update, the minimum player limit was reduced to 3. As with Freemode Events, they occur every 12 minutes (6 in-game hours).

Freemode Challenges, like Freemode Events, alert the player in advance before the challenge begins. On screen instructions will indicate what the player has to do, where the player has to be, and gives them 3 minutes to prepare for each challenge. All valid players[1] are placed onto a leaderboard once the Challenge begins. Those who are valid will be alerted once the mission begins and a top-3 leaderboard appears at the bottom right of HUD, for 1st, 2nd and 3rd positions. The lobby player list becomes purple, headed the Freemode Challenge title, the points system, and a points value beside each player (default to 0). Those who are not actively participating the event will be colored default blue and will lack a point beside their name.

Any requirements or limitations will be pointed out during the event - for example, during challenges involving killing, citizens of Los Santos and Blaine County are not registered as valid kills. Most challenges last 5 minutes and in the last 30 seconds of any challenge the player has gained a point in, the timer will turn red and the Freemode Events Countdown theme will sound.

If the player dies while gaining a score, they will respawn nearby a random vehicle spawned specially for the mission. This does not apply to the "Longest Wheelie" and "Longest Stoppie" challenges.

As of the GTA Online: After Hours, the following Freemode Challenges are no longer triggered:

Longest Freefall Challenge.
Add a photo to this gallery 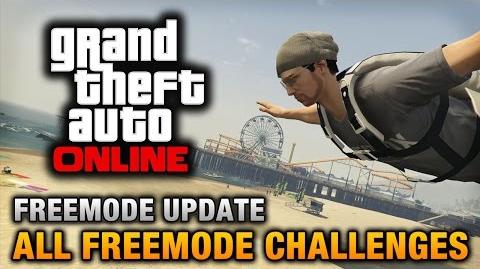 Retrieved from "https://gta.fandom.com/wiki/Freemode_Challenges?oldid=1288986"
Community content is available under CC-BY-SA unless otherwise noted.