The Canis Freecrawler is an off-road SUV featured in Grand Theft Auto Online as part of the After Hours update, released on September 4th, 2018, during the Freecrawler Week event.

The Freecrawler is a four-door SUV evidently based on the Rezvani Tank SUV, itself being a rugged take on the Jeep Wrangler (which the Mesa is based on), having the characteristic profile and angled compartment. The tail lights seems to take inspirations from those of the Hummer HX. 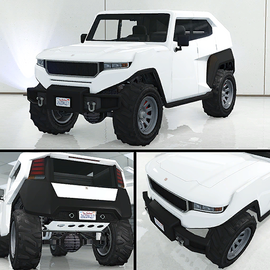 The Freecrawler on Legendary Motorsport. 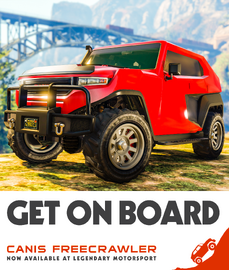 Retrieved from "https://gta.fandom.com/wiki/Freecrawler?oldid=1147968"
Community content is available under CC-BY-SA unless otherwise noted.