Frederick Harrison is, in 2008, a criminal in Liberty City who is wanted by the LCPD for grand theft auto. He can be killed by Niko Bellic depending on the player's choice He is listed as one of Alderney's Most Wanted criminals, even though he does not appear on the internet police database. He has the same model as some Taxi Drivers. 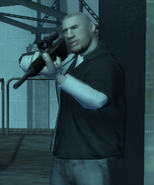 Frederick taking on Niko with his Sniper Rifle.
Add a photo to this gallery

Retrieved from "https://gta.fandom.com/wiki/Frederick_Harrison?oldid=970981"
Community content is available under CC-BY-SA unless otherwise noted.