Lamar: "You the one all pumped up on doing this lick, ni**a. I'm getting my money in the hood, I'm straight, fool. I'm cool."
Franklin: "You cool? Cool what? Slinging dope and throwing up gang signs?"
―Franklin and Lamar at the beginning of the mission.

Franklin and Lamar is the first mission in Grand Theft Auto V, given to protagonist Franklin Clinton by car dealer Simeon Yetarian.

Nine years after the events of the Prologue, Michael De Santa is having a conversation with his therapist, Dr. Isiah Friedlander. Michael is growing increasingly unhappy at the fact that he is going through a midlife crisis, beginning to release a small amount of stress by shouting at Dr. Friedlander that the perfect life he dreamt of is disjointed, thus ending their brief session for the day.

Michael heads outside and sits on a bench in Del Perro Beach. This brings him into a chance encounter with Lamar Davis and Franklin Clinton, who he reluctantly redirects to their repossession location. The story then turns to focus on Franklin as he anxiously questions Lamar's motives for proceeding with the repossession, as he doesn't see it as legitimate work. They arrive at the property and after Franklin decides which vehicle he would like to acquire, he accompanies Lamar on a high-speed chase throughout different parts of Los Santos.

Franklin and Lamar end their chase at the Union Depository car park. As the men exchange repartee with each other, they hear the LSPD sirens, which causes them to drive away in different directions to lose the unwanted police attention. Once the wanted level is dealt with, Franklin meets Lamar at the back of the Premium Deluxe Motorsport dealership, where they witness their boss and owner of the car dealership, Simeon Yetarian, berating a young man, Jimmy De Santa, for making racist comments about him (the actual reason for this being that he is trying to scam him into buying a BeeJay XL, something that Lamar himself points out to Franklin).

Both Lamar and Franklin leave the dealership and head to Franklin's house, where Lamar mocks Franklin's haircut after he's been denied access to Franklin's home. The mission concludes as Franklin walks around the house, which also leads to the brief introduction of his aunt, Denise Clinton, and the basics of the game.

This mission is immediately started after completing Prologue.

Choose one of the cars.

After the first cutscene, the player gains control of Franklin. One of the first decisions in the game is choosing between a convertible Dewbauchee Rapid GT and Obey 9F Cabrio. This decision has no impact on the story, and will only cause the conversations to differ upon entering the car. The mission will fail if the player damages the cars too severely.

Upon choosing a car and watching the duo retract the cars' roofs, Lamar speeds away and the player has to follow him. The player starts off on Great Ocean Highway, goes through Del Perro and Rockford Hills, to Richards Majestic, and through Vespucci, Little Seoul and Pillbox Hill, where Franklin and Lamar stop at the car park of the Union Depository. To attain a gold medal in this mission, the player needs to use Franklin's special ability for at least 7 seconds, avoid hitting the actors while passing through Richards Majestic, avoid taking damage to the car and win the race against Lamar. The mission will fail if the player goes too far away from Lamar. There are no repercussions for hitting actors in the movie studio or losing the race against Lamar, apart from being unable to attain a gold medal. Damaging the car too much will result in an alternate version of the post-mission phone call, and destroying the car will fail the mission.

Get back in the car.

This objective only appears if the player exits the car. During the race it will result in a mission failure as the player will be unable to catch up to Lamar after exiting and re-entering the car.

Park next to Lamar.

This objective appears if the player is too far behind Lamar on the entrance to Union Depository or decides to go around the garage into the parking lot.

After Franklin and Lamar meet at the car park of the Union Depository and discuss Franklin's loss or victory of the race, the cops are alerted and Lamar speeds off. The player, on their own, has to lose a two-star wanted level. The easiest way to lose the cops is getting out of their sight and hiding in the alleys near the dealership. Another easy way to lose the cops is to enter the subway tunnel construction site at the Del Perro Freeway (although if you're not careful enough you might damage your car, either from the jump in the tunnel site, or the speeding cars in the freeway).

Take the car back to the dealership.

After successfully losing the cops, the player has to take the car back to the dealership to continue with the mission.

Get in your car.

Once the repossessed vehicle is delivered to the dealership, the player needs to enter Franklin's personal vehicle.

The final part of the mission is to drive to Franklin's house, and park the car in his garage. A short cutscene plays, introducing the player to safehouse functions, and the player is now free to roam around the map. The reward for completing the mission is $250 and a "Welcome to Los Santos" Achievement/Trophy.

Any bonus content, such as returning player bonuses (X1/PS4/PC only), DLC weapons (X360/PS3 only), Interaction Menu, Social Club content, or Special/Collector's Edition and pre-order bonuses, will also be unlocked once the player leaves the safehouse.

Michael points out the house.

Franklin speeds off with the stolen 9F Cabrio. Someone (probably the owner) is seen in the background running after.

Racing through the freeway.

Michael walks along the beach.

Michael sitting on a bench. Franklin and Lamar are seen in the background.

Franklin and Lamar walking towards the cars.

Franklin retracts the roof on a 9F Cabrio.

Going through the movie studio.

Going through the parking garage.

Franklin and Lamar before the cops arrive.

Franklin tries to lose the cops.

The living room with Aunt Denise. 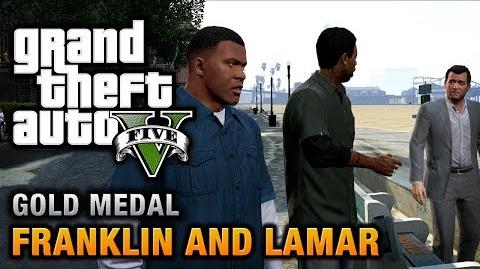 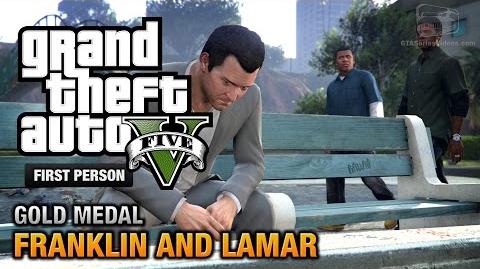 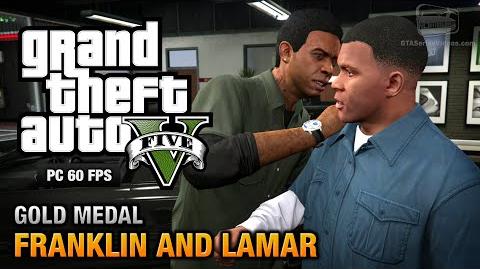