The avenue starts in the north at an intersection with Exeter Avenue in Northwood, travels west before turning directly south, passing through the areas of North Holland, Middle Park, Star Junction, The Triangle, and coming to an end at an intersection with Union Drive West in Suffolk. The avenue continues on in the north as the Northwood Heights Bridge, and south as Castle Drive.

Being one of the major throughways and one of only three 4-lane avenues in Algonquin, the road is home to a large number of prominent places, landmarks and skyscrapers as it passes through different agglomerations and settlements. Perhaps the most common figures being the Pay 'n' Spray garage located under the L-train tracks and Adriana Yanira Lopez's house, both located in Northwood. The west face of Rotterdam Tower is found on the avenue, as well as Bahama Mamas and Split Sides Comedy Club, and the entrance to Booth Tunnel in Westminster. Among landmarks are services, including the Westminster Fire Station, Suffolk Police Station and Holland Hospital Center.

At the northern end of the road, footpath bridges overhang the road as it meets a crossroad with Exeter Avenue, where it continues on as Northwood Heights Bridge passing over the Humboldt River toward Bohan. Unlike other avenues, the road's 4 lanes are divided in two by decorations continuing into parking areas underneath the passing L-train, the Algonquin Inner Line. The L-train meets at a raised station in North Holland built upon ironwork and a large iron bridge running down the center of Frankfort Avenue. At the same station, an underground subway portal accesses the Algonquin Outer Line. Frankfort Avenue humps uphill slightly on either side of Uranium Street, while the L-train descends, leading it underground through a tunnel within the center of the avenue, after which Frankfort Avenue's traffic lanes merge once again as they descend toward Middle Park. Along the Middle Park span, the street provides excellent views of Middle Park's western fringe with the Algonquin city skyline backdrop. Middle Park West and Varsity Heights run along the west holding many luxury apartment buildings and the prominent Liberty State Natural History Museum. As it enters the midtown area of Algonquin, the contrast between the regions of Star Junction and Purgatory become visible, the former dominated by looming skyscrapers and bright lights of the Star Junction advertising district shine through the individual streets connecting to Frankfort Avenue, while the latter is home to smaller businesses, grocery stores and clubs, among an urban industrialization. In comparison, passing through The Triangle, smaller but otherwise more traditional skyscrapers, particularly of art-deco styling, replenish the urban metropolis environment, and appear to reveal historical areas of the city with significantly older buildings. Dipping into Suffolk, smaller buildings but otherwise richer and higher end, fashion stores are prominent in this short-lived span of the avenue, perhaps most dominated by the Suffolk Police Station. The road descends and curves toward Union Drive West before intersecting with it, leading on onto Castle Drive.

The entire street is a 4-lane road flowing in both directions and connects to 24 streets - almost all horizontal streets of the Algonquin alphabetical system, namely F, G, H, I, J, K, L, M, N, O, P, Q, R, S, T, U, V, W and X, falling short of A, B, C, D and E. It also has connections to the Booth Tunnel, West Way, Hell Gate and Exeter Avenue.

Frankfort Avenue appears to be the second longest avenue in Algonquin, beaten only by Columbus Avenue. Bismarck Avenue's span is technically slightly longer than both Columbus and Frankfort, however Bismarck is split into several spans and cannot be traversed in one run. Similarly, however, both Columbus Avenue and Frankfort Avenue are broken in half by construction work, leaving detours to be made, making Albany Avenue the longest, single stretch of road without hindrance.

It is likely based on Manhattan's Eight Avenue, given where it passes through, particularly in the Middle Park and The Triangle areas of Algonquin, which appear to be based on Eighth Avenue's notable Central Park and Times Square stretches, respectively. 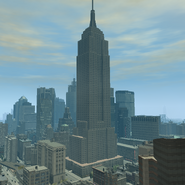 Rotterdam Tower, The Triangle.
Add a photo to this gallery

Westminster Fire Station, Westminster.
Add a photo to this gallery

Retrieved from "https://gta.fandom.com/wiki/Frankfort_Avenue?oldid=1176246"
Community content is available under CC-BY-SA unless otherwise noted.