Thomas Lyons
“You know there's no good, and no evil... just shades of fucking grey.”
— Francis McReary to Niko Bellic in Holland Nights.

Francis is the corrupt Deputy Police Commissioner, and the second-oldest son of the McReary Family. He works at the Westminster Police Station in Westminster, Algonquin.

Francis and his siblings grew up in an Irish Catholic home. He is frowned upon by his brothers, who consider him a hypocrite for his career in law enforcement; Patrick McReary remarks that "Francis is just as crooked as we are — more so"; Francis gives his brothers similar disdain for their open criminality. He initially aspired to become a priest, but as his brother Patrick recalls, he had to abandon that ambition after being caught cheating on his final test to qualify; as an altar boy, he also had a tendency to steal money from the church collection plate.

Francis tells Niko that his philosophy to cleaning up the streets of Liberty City is "one percent at a time" — assassinate small-time crooks and drug dealers one by one, to "improve" the city without involving the legal system. This may be mere self-justification on Francis' part — the tasks he sets for Niko are overwhelmingly focused on covering up his own misdeeds. Francis is implied to have illicit tastes, which go unspecified but which may be related to drugs and/or prostitution, as he orders the assassination of a drug-dealing pimp who is implied to be personally inconveniencing him.

It seems he has the same philosophy as Frank Tenpenny, thinking if a necessary number of people do things like he does, the community would improve.

Francis first meets Niko Bellic during a publicity spot with Manny Escuela. Later in the game, he calls Niko and arranges a meeting at Castle Gardens, where he reveals that he knows of Niko's criminal activity in Liberty City; Niko agrees to work for Francis in exchange for his turning a blind eye to Niko's other crimes.

Francis first orders the death of a blackmailer who possesses incriminating photographs, and then the death of Tom Goldberg, a lawyer who has evidence against Francis. He has Niko kill a drug-dealer and pimp in the East Holland projects, and then the dealer's accomplice, who is threatening to talk to the police about McReary.

After Francis' brother Derrick returns from Ireland, Derrick intends to expose Francis' corruption out of spite, something Francis could not accept as he aspires to become the Commissioner of the LCPD. He orders Niko to kill Derrick during a meeting he has arranged with his brother. Niko either chooses to follow Francis' orders, or goes against them and spares Derrick's life by killing Francis instead. Either choice will end Niko's contact with Francis, although Niko can choose to exploit Francis' guilt in the future if he survives. Killing Derrick also allows the player to retain the services of using Francis to remove any acquired wanted levels for the remainder of the story. If the player chooses to assassinate Francis during the mission "Blood Brothers", he is then buried at the Colony Island cemetery.

Francis is a cynical, corrupt, and rather ruthless police officer, who prefers to get things done the "old fashioned way". He can be quite hypocritical (if not narcissistic); he talks of the sins that his opponents have committed, yet doesn't seem to be willing to take responsibility for his own faults, or even admit his wrongs. He will do anything for power, and will use whatever means and pawns to accomplish his goals. Francis tends to be quite sarcastic and ironic in his demeanor, mixing it with his cynical attitude of the world.

Despite this, Francis does seem to develop a sort of respect for Niko; if he is spared, he is willing to clear Niko's wanted level if called. Additionally, Francis pays Niko handsomely for his work, and never backstabs him at any point.

If Francis' life spared in Blood Brothers, the player can call him and have any wanted level up to 3-stars they have cleared by him. Although this can be done multiple times, the wait required between calls is undetermined — calling too soon after the last successful call will merely redirect to Francis' answering machine. Once the player finishes the story missions, Francis' ability will not be available anymore because most contacts, him included, on Niko's cell phone are deleted at the end of the game. 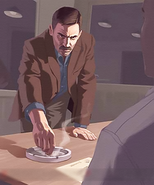