GTA Wiki
Register
Don't have an account?
Sign In
Advertisement
in: Airports, Locations, Locations in GTA IV,
and 5 more
English

The airport is serviced mostly by FlyUS and their fleet of Boeing 747-300s (which seem to be the airport's only air traffic), and a handful of Shamal-based planes. A dedicated terminal for "Adios Air" is found on the northern part of the main building; however, this is the only indication of a rival airline. FIA has several stationary jets (similar to Bombardier CRJ-100s) nearest the helipads and southern most entrance; some in FlyUS' express theme, some are private business jets from various countries.

FlyUS uses the airport as a hub, and once inside the airport the player will notice FlyUS Perennials and FlyUS Ferocis travelling around the approach roads and parking lots, and many of ULDs (aircraft containers) bearing the FlyUS logo and FU serial markings are spread out.

Three Annihilator helicopters parked on three helipads (two Buzzards and one Annihilator in TBoGT) can be flown in multiplayer. and is the starting point for the co-operative mission Hangman's NOOSE. Also, Team Deathmatch games can be started in the airport. It is a common tactic for players, when starting matches, to make a beeline for the choppers and making sure no enemies get inside of them.

Upon entering the runway or certain inner grounds of the airport during single player, the player receives a four star wanted level while on foot or in a land based vehicle, and a fleet of NOOSE Cruisers or NOOSE Patriots, FIB Buffalos, and NOOSE Enforcers will give chase and stop the player with whatever means necessary. While in a helicopter, only a two star wanted level is attained, which can easily be evaded by flying away.

The airport is considerably different in GTA Chinatown Wars; entering the runways does not give the player a wanted level and none of the airplanes have any logos on them. There are also more helipads on the north area of the airport, yet, since helicopters aren't pilotable in Chinatown Wars, these are empty.

Airplanes present in this rendition include large Boeing 727-like jets and small private jets, which can occasionally be seen both stationary around the airport and taking off and landing on the runways, but never moving from them.

The airport's terminal and control tower are based on Terminal 5 (the former TWA Terminal) and the control tower at John F. Kennedy International Airport in Queens, NY, respectively, while the runway design emulates that of LaGuardia Airport, also in Queens. The airport's logo resembles that used on the defunct Pan American World Airways.

The Broker Line runs through the Francis International Airport station, providing arrivals to the city with quick travel to the rest of the city and departures easy and convenient access to the airport.

From the road, the most convenient access to the Airport is offered by expressway exits. Both the Broker - Dukes Expressway and the Algonquin - Dukes Expressway possess exits to FIA. There is also an access road from Willis; this can be reached from Tudor Street. 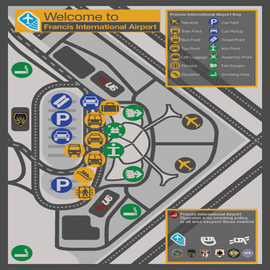