GTA Wiki
Register
Don't have an account?
Sign In
Advertisement
in: Airports, Locations, Locations in GTA III,
and 10 more
English

View source
watch 02:56
Raise a Floppa - The Loop
Do you like this video?
Play Sound
For the HD Universe equivalent, see Francis International Airport (HD Universe).

The official website of GTA III offers a brief insight into the airport's history and facilities:

“Liberty City's Gateway To The World. Where we meet new friends and prodigal sons. Francis International has proudly served all of Liberty City's transportation needs since 1953. For the executive traveler, relax in our business class lounge, or enjoy a pre-flight drink in DODO'S, our cocktail lounge. With hundreds of shops and services, Francis International is airport to the stars. 100's of domestic and international destinations served including: London, San Andreas, Vice City, Miami, Bogota, Amsterdam, Bangkok, Toronto, Leith and Tokyo. Fares Starting as Low as $ 69 Each Way.”
— GTA III Website.

FIA does not have a single inspiration for its design, incorporating an original terminal design (the frontal terminal building is a largely unadorned, blocky structure), as well as featuring an extension similar to Los Angeles International's Theme Building. Francis International is also connected to the Liberty City Subway, via a stop located southeast of the main terminal and an adjoining square that features a statue bearing the following inscription: "For those who fought for freedom 1936". In GTA III this statue dons a traffic cone on its head, removable only by shooting an RPG at it. The cone will return to its original place the next time the player returns to the statue.

A fire station is situated near the entrance to the rear of the airport, as such; a Fire Truck is always available from there. Opposite is a car park which has various spawned cars. The infamous half-winged Dodo is also in one of the hangars and next to a helipad, notorious for the level of skill required of the player to actually fly it.

The runways and hangars of the airport contain many airliners, but they are just static objects and therefore are inoperable. GTA III also features static, unobtainable helicopters in addition to the airliners, appearing in news, rescue and civilian (with a Rockstar Games logo) versions. In Liberty City Stories, some of the airliners can be viewed taking off and landing and taxiing around the runways. Colliding with a taxiing plane can destroy the vehicle Toni is riding in and potentially be fatal to him.

The airport's interior makes a brief appearance in Grand Theft Auto: San Andreas, when it is featured during the first cutscene of the game. While the interior is found to be situated in the Hidden Interiors Universe, the location also comes with an exterior of the airport with a roadway, appearing to resemble the airport's exterior in Grand Theft Auto III, which appears for a while, when Carl Johnson goes from airport in a taxi.

The airport also exists in Grand Theft Auto Advance. The player can still see (and get near) the non-enterable planes around the airport, most of them low-textured planes similar to the Boeing 747. There are also other small red planes and helicopters around the airport, but are inaccessible due to the top-down perspective.

The rear design of the airport, as viewed from its tarmac towards the northeast, 2001. (GTA III).

Picture of an Airtrain landing at the airport runway

The statue and square close to the nearby subway station, with Staunton island in view, 2001 (GTA III).

The front terminal of the FIA in 1992. The interior can be seen through the bottom floor windows. (GTA San Andreas)

The arrival flights in the 1992 depiction of the airport. (GTA San Andreas) 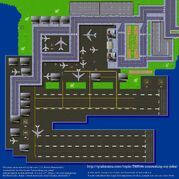 The airport map in GTA Advance.

Another logo, can be found in hangar