In-game time
“Drop whatever you're doing. I've been surveilling two trailers of weapons in Cypress Flats for a while now but they just got hit. I don't know who the crew is but they came in numbers. Get down there and stop this happening. This is my job not theirs. Deal with them and bring the trailers back to the warehouse.”
— Description

Four Trailers is a mission in Grand Theft Auto Online given to the player by Lester Crest. It is playable for up to 6 players.

Lester learns of a new shipment of weapons from a crew and wants them for himself. There are heavily armed guards patrolling the area on South Shambles Street, many with Carbine Rifles and other heavy weaponry. Once they are taken out, the players must take two trucker cabs and steal the trailers and take them to Lester's warehouse whilst being chased by several SUVs. 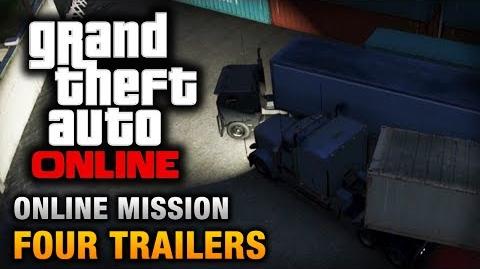