The Fort Zancudo Approach Road is a two-way bridge / road in Blaine County that begins at Route 68 in Great Chaparral and ends at one of the entrances of Fort Zancudo.

The Approach Road has an Ammu-Nation store next to it located on Route 68, which is ironic, as the player might buy armor and ammo here in order to raid the military base. 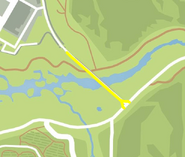 Map location.
Add a photo to this gallery

Retrieved from "https://gta.fandom.com/wiki/Fort_Zancudo_Approach_Road?oldid=1168640"
Community content is available under CC-BY-SA unless otherwise noted.