Entrance of the Fort Staunton Opera House prior to its destruction.

Destroyed in 1998 and remains mostly destroyed up to and past 2001.

The opera house can be found in Fort Staunton, Staunton Island. It is located across from Liberty City Community College in Liberty Campus and the Carson General Hospital in Rockford. The building is featured in the mission A Date With Death, in which Toni chauffers Toshiko Kasen to the opera house. The building is destroyed alongside the rest of Fort Staunton in Bringing The House Down. Its ruins can be accessed afterwards. In 2001, the setting of Grand Theft Auto III, the opera house has mostly been demolished, with only its western wall remaining. 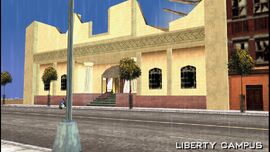 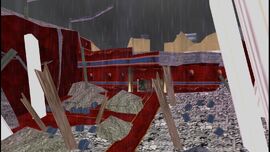 The interior of the destroyed opera house. 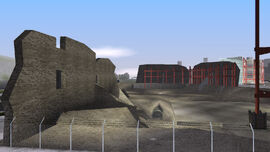 Retrieved from "https://gta.fandom.com/wiki/Fort_Staunton_Opera_House?oldid=1316384"
Community content is available under CC-BY-SA unless otherwise noted.