Fort Carson is the largest town in Bone County in San Andreas.

Henry Bolt, Colonel of the 66th Cavalry stationed in Fort Carson, in 1842 led them towards Las Barrancas. The entire force fell into a hole on their journey. A tribute, the Barrancas Mass Grave, stands in memory of Colonel Henry Bolt and his forces.

It is the county seat of Bone County, as indicated by the small red building in the main street, having been significantly undeveloped as of 1992. North of the town is Lil' Probe'Inn, as well as Area 69, The Big Ear, Green Palms and Regular Tom, while to the south is the Martin Bridge and Red County. West of Fort Carson is Tierra Robada, while to the east is Hunter Quarry. There is an Ammu-Nation and Cluckin' Bell just outside of town. Fort Carson also boasts five Motels. A miniature version of the Vinewood sign is perched upon a hill on the eastern side of the town, though the name is changed accordingly. Pedestrians are mostly White and Latino, and predominantly consist of elderly women, workers and rednecks, though comparatively few pedestrians appear on the streets.

Fort Carson is based on Carson City, the state capital of Nevada. 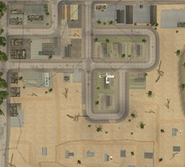 The location of the Beagle in Fort Carson.

The "Flight to Hell" Glitched into a wall. Pay close attention to the wings' position.

A view of the town to the southeast.
Add a photo to this gallery

Retrieved from "https://gta.fandom.com/wiki/Fort_Carson?oldid=1157501"
Community content is available under CC-BY-SA unless otherwise noted.