Wikipedia has an article on:
Forklift truck
Wikipedia

The Forklift is, as the name suggests, a small, light powered industrial truck used to lift and move materials over short distances. It features two steel forks on the front to grab cargo and lift them, and a control panel where the operator sits.

The Forklift has been redesigned for Grand Theft Auto IV, with a slightly modified cab and no tail lights. Additionally, the Forklift features safety illustrations printed on the vehicle, accompanied by the caption "YOU WILL DIE", as well as a tank of what seems to be propane. Shooting it will either cause it to leak ignited gas (illustrated with a visible jet of blue flame), or ignite and destroy the vehicle.

In Grand Theft Auto V, the Forklift retains the GTA IV design, with a few tweaks to it (the HVY decals, for example, are removed from the vehicle) and it now features a rusty paintjob, like most industrial vehicles. The lift feature has been re-activated. 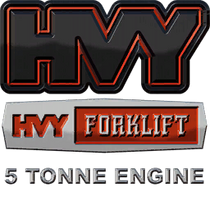 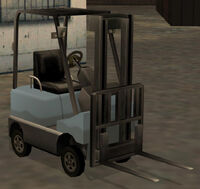 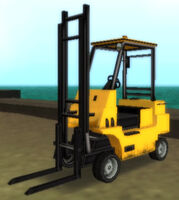 As befitting its purpose as an industrial vehicle, the Forklift's performance in both Grand Theft Auto: San Andreas and Grand Theft Auto: Vice City Stories, is, predictably, very poor. With low power, rear wheel drive and rear steering, the Forklift moves very slowly and has very sensitive steering to the point that sudden turns will pitch it violently to one side and frequently tip it over. Control can be a problem, due to its rear-wheel steering. The Forklift has a very low center of gravity.

In GTA Vice City Stories, the Forklift's speed is lower than that of the player's running speed, though it can go faster in reverse.

While it is the slowest vehicle in GTA IV, the vehicle still has impressive acceleration thanks to what can assumed to be (judging by the rear gas canister, and its silenced engine noise) a gas engine, which puts a large amount of power into what is stated to be a 5-tonne engine - a realistic addition. Unlike the GTA San Andreas rendition, the Forklift is now a single-speed vehicle.

Again, the Forklift has a very low center of gravity, which means the vehicle is highly sensitive to bumpy terrains and very weak against basic cars, like the Merit or the Vincent, but makes up for being easy to flip it back on its four wheels. Because of its rear-wheel steering, the player may often lose control of the vehicle when taking corners at moderately high speeds. The Forklift's handling traits are similar to those of the Caddy.

Players should be aware that the Forklift is very weak against crashes and gunfire, and if an enemy manages to shoot the gas canister on the back, a stream of flame comes from the punctured hole, causing to either burn the driver or the vehicle itself. Also, the forks remain static and can result in the vehicle struggling to drive over low objects, such as curbs.

The Forklift in Grand Theft Auto V is only slightly different from IV, in that the low-center of gravity becomes stiffer and therefore tipping is less likely; but it can now manage to lay on its side without flipping back (due to its increased mass). The engine remains the same, bearing the same silenced noise and gas-powered model (evidenced by the rear gas canister mounted above the engine), but now powering the rear wheels, a rather strange layout for a vehicle of its type. 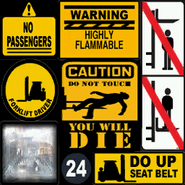 The Stickers first found on the GTA IV Forklift.
Add a photo to this gallery

The Forklift on the Rockstar Games Social Club.
Add a photo to this gallery

Retrieved from "https://gta.fandom.com/wiki/Forklift?oldid=1133174"
Community content is available under CC-BY-SA unless otherwise noted.