The Forellis used to be associated with the Leone family, and broke off from them before the events of Vice City for unknown reasons.

Acting under orders from Sonny Forelli, then don of the organization, Forelli Family associate Tommy Vercetti was sent to kill a key mobster in Harwood, Liberty City. However, the conflict escalated, being part of a setup by Sonny. Vercetti killed eleven men in the conflict before being taken into custody. Sonny Forelli was able to reduce Vercetti's sentence to a mere fifteen years through unknown means. Vercetti earned the nickname "The Harwood Butcher" for his part in the affair.

By 1986, the Forelli family were the most powerful Mafia family in Liberty City. In GTA Vice City, the Forellis decided to expand "down south" by establishing relations with local Vice City drug cartels. Tommy Vercetti, fresh out of prison after the Harwood incident, and crooked lawyer Ken Rosenberg were selected by Sonny to conduct a deal with Lance Vance & Victor Vance. However, Ricardo Diaz, the city's top drug baron had found out about the deal through Gonzalez. Angered by the fact that the deal was organized through Juan Cortez rather than him, Diaz hires three goons to ambush the deal, which results in the deaths of Harry, Lee and Victor Vance. Following this, Vercetti split from the Forellis, taking over the drug trade in Vice City. Angered, Sonny came to Vice City personally to claim Vercetti's profits, which Sonny saw as his by right, and was killed in the conflict. Sonny's brother, Marco Forelli, became the family's new don.

In GTA San Andreas, Caligula's Palace casino in Las Venturas, San Andreas, was split between Forelli, Sindacco, and Leone families. The Families couldn't decide between themselves who should run the casino. Therefore, former Forelli lawyer Ken Rosenberg was put forward as a neutral party. Should any war between the families ignite, Rosenberg would be killed.

While Johnny Sindacco was at the hospital after being traumatized by Carl Johnson, Marco Forelli decided to take the opportunity to kill Johnny by sending his goons to hijack his ambulance. Rosenberg becomes aware of the hit, and sends Carl Johnson to retrieve Johnny's ambulance before a war is ignited between the families. However, Johnny later dies of a heart attack after seeing Carl again, and Salvatore Leone returns to Las Venturas to reclaim the money that he invested in the casino from Rosenberg. Marco later sends Forelli hitmen to kill Salvatore, who was aware of the hit, and he decides to send Carl to kill the hitmen in their flight before they arrive in Las Venturas. The hit leads to Salvatore to strike back by sending Carl to Liberty City, to kill Marco at Marco's Bistro.

In GTA Liberty City Stories, the Forellis deal with the death of Mayor Roger C. Hole, who was working for Franco Forelli, the leader of the Forellis following Marco's demise. He then had found another representative, Miles O'Donovan, to go against Donald Love, who was representing the Leone Family. However, O'Donovan wins as the voters found out that Love was unfit for office because he was working with Toni Cipriani.

Later on, a war was sparked between the Forellis and the Sindaccos in Fort Staunton, which was caused by the Sicilian Mob, after the Sindaccos had begun invading Forelli territory on Staunton Island. Toni is caught up in it, as Salvatore Leone takes advantage of the war to foil Massimo Torini's plan to take over the city. The war leads to both families to be weakened as upcoming gangs like the Uptown Yardies and the Yakuza take over their territory left behind. The families eventually try to broker a truce, only for Salvatore to use Paulie Sindacco's car to kill the Forellis attending the peace meeting. As the war continues, the Forellis continue to lose territory on Shoreside Vale, after Toni Cipriani and the Southside Hoods take over the last expanding turf the Forellis have occupation in. The war continues until Paulie Sindacco was killed after trying to flee Liberty City, after his involvement in getting Salvatore jailed.

The Forellis later target the Yakuza, after Kazuki Kasen had taken over most of the territory in Liberty City and began stocking up on powerful weapons such as a tank. The Forellis catch Kazuki's wife Toshiko Kasen attending the Fort Staunton Opera House with Toni Cipriani, and attempt to kill her (not knowing that Toshiko is against her husband's plots). The Forellis are later completely weakened after their main base of operations, Fort Staunton, was destroyed by underground explosives in the old subway main line running through southern Staunton Island. Whether Franco was killed in the explosion is unknown but the family was left devastated.

By 2001, the events of GTA III, they are now named the Forelli Brothers, and the gang now appears to share a very small presence in the city, presumably due to the events of 1998.

A high-ranking member of the gang, Mike Forelli, is killed in a car explosion by Claude, who rigged his car with an engine bomb on orders from Joey Leone. Joey soon after orders Claude to dispose the corpse of a Forelli lying in a car at Greasy Joe's. After evading the Forellis, Claude disposes the car off at Harwood Autocrusher and Junkyard. Later, several members of the Forellis try to blackmail El Burro into giving them a cut of his pornographic material in threat of killing off an actor, but are also killed by Claude, who lured them into being blown up by a detonation bomb rigged Mr Whoopee truck.

In GTA Liberty City Stories, Forelli henchmen don blue/dark red shirts with light blue/white jackets over and carry pistols. In GTA III, they are dressed like the Leones as seen in one of Joey Leone's missions, while the dead mobster in the Manana looks like a Leone too, except that he has no gloves. In GTA Vice City, the Forelli's are seen wearing light blue or brown Hawaiian shirts. In GTA San Andreas, the mobsters (presumed to be the Forelli's) either dress in brown jackets, light green shirts with black pants or black jogging suits. In GTA Vice City Stories, the Forelli hitmen seen in a couple of missions wear dark colored shirts with black jackets over, identical to the Mendez Cartel. 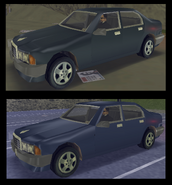 Their first appearance in GTA III, "Dead Skunk in the Trunk". 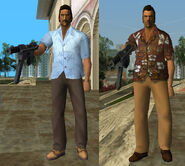