Luis shoots a Police Maverick with an Explosive Shotgun.

• ­Get to the Algonquin Bridge.

• ­Get in position above the tracks.

• ­Wait for the train and jump onboard.

• ­Fight your way along the train and disconnect the front carriage.

Caught with your Pants Down
Dropping In

"The price of the fleet. The assfucking flagship of the LTA. Give it up!"
―Yusuf Amir

For the Man Who Has Everything is the final mission given by Yusuf to Luis Lopez in The Ballad of Gay Tony.

Complete the mission in 4:20
Take less than 50% damage
Duck under the Annihilator flying above Dillon Street
Destroy 8 Police helicopters and Annihilators destroyed while on the subway cart

Yusuf wants to send a subway car to the Gulf as a decoration for his new property (an Underwater Submarine Train from the LTA, going through a delicate Coral Reef in the Gulf). Drive Yusuf to the Broker end of the Algonquin Bridge. The first objective is to jump on a train from the nearest overpass. Luis will then make his way up to the front car of the train as he gains a 4 star wanted level (later 5 stars) and the police are trying to shoot him from Maverick and Annihilator helicopters. Once Luis has disconnected the first car from the rest of the train, Yusuf appears and raises it using the Skyhook helicopter.

Note that this mission is scripted to a specific point - even if Luis makes it to the front car relatively quickly, Yusuf will not appear until the train has passed Huntington Street Station.

As such, it's best not to rush through this at the expense of health, as Luis will always have a hard fight on his hands, especially with the Annihilators as NOOSE uses its mounted guns. Take time to drop the choppers and use the breaks in waves to advance. After a while, Luis detaches the train car, allowing Yusuf to steal it with a Skylift.

Lowering Luis down to the baseball diamond in Meadows Park, Yusuf departs, giving his thanks over the loudspeaker.

"Witnesses say it's like something out of a Vinewood movie. Jenny Acorn at the scene."

Reporter: "That's right, Jim. It's like a Vinewood movie, only without the hooky computer-generated effects, terrible dialogue and shitty acting. In an audacious raid, terrorists have stolen a Liberty City subway car in Broker. While it is believed no civilians were on board the missing car at the time it was taken, authorities still urgently seek its return."

"From the coast of East Africa to the shores of the Humboldt River, pirates have become the principal menace to twenty first century commuters. In one of the most daring steals of the last few months, a band of pirates have stolen a subway car in Broker. Bystanders report a "dusky" looking man climbing along the roof of the train and unhooking it before it was pulled into the air by a Skylift. Authorities lost track of the car and Skylift as it disappeared behind a building."

"While no ransom demands have been delivered yet, the mayor expects this incident to be in line with other recent piracy around the world. Coming in a year in which an oil rig was stolen in the North Sea and an entire skyscraper went missing in Singapore, it is now thought that nowhere is safe from the pirate menace." 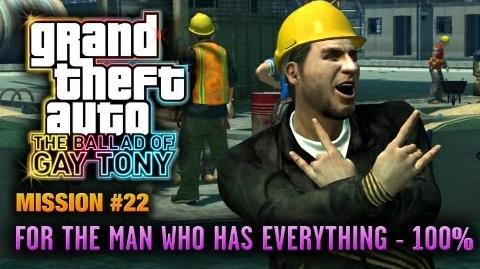 Luis advancing on the train top.

Luis being chased by police helicopters.

Luis holds onto the car as Yusuf latches onto it with a Skylift.

Luis on the train being followed by two Police Mavericks.

Luis ducks as an Annihilator flies over him.
Add a photo to this gallery

Retrieved from "https://gta.fandom.com/wiki/For_the_Man_Who_Has_Everything?oldid=1288174"
Community content is available under CC-BY-SA unless otherwise noted.